There were two things that I asked for, if we ended up having a daughter. One, was that we would eventually paint her room to have some pink accents with the brown that already exists ... two, that we would purchase a new stroller.

It really was time. Our car seat was 5 years old, navy, haggard ... and the stroller we had (Peg Perego) was beaten up, clunky ... and navy. We also had a Zooper jogging stroller ... that weighed a ton and took up the entire trunk of our van. Both are going on Craigslist, or will be donated to someone (or organisation) that could really use them.
So, we off we went to TJs The Kiddie Store to look.
After much deliberation and research, we ended up with the Baby Jogger "City Elite" stroller, and yesterday I had my first outing with it. 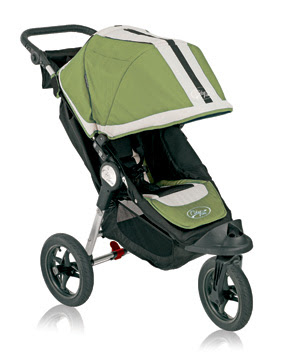 What did I think??? IT'S AMAZING!!! Super, super light - one movement to open and close it ... it wheels with one hand, and is small enough to go through narrow openings. We purchased an attachment so that the carseat can click in, but it was super easy to do - and the carseat fits perfectly (we bought a new Grayco one, the most inexpensive carseat we could find ...). There is storage at the bottom, plus small storage pockets at the handles and my diaper bag hangs perfectly. Originally, I had wanted a "girly" pink colour ... but the green was lovely, and so we went with that (plus, it came in red - not pink).

I HIGHLY recommend this product, if you're in the market for a new stroller!!
**I've fallen behind in "daily life", and become consumed with our new addition *smile*. I'm wondering what kind of posts YOU like to read? Would you like to see more renovations "before & after" pictures? Digiscrap pages (I've actually been catching up on those!)? Recipes & meal plans (um. right. I need to start doing that again ... )? Or do you like to grab a coffee and read stuff that I just ramble on about - things I'm learning/dealing with/excited about? ... Let me know - would love to hear from you!**
Posted by Tawn at 9:13 AM

I love reading about everyday things, as well as recipes etc! Congrats on the baby!

Did we see the finished renos? I must have missed all but the front room?!?!

Finally caught up on my readings on this end!! Woot! Now for a coffee!!

I found this site using [url=http://google.com]google.com[/url] And i want to thank you for your work. You have done really very good site. Great work, great site! Thank you!