Before I start, can I just say how RELIEVED I am that Tias' birthday is over.  Is that bad??  I mean, I just find that I can't think about anything else - not because I'm crazy excited and can't wait for it - but because I'm nervous, terrified that I'm going to forget something.  I find birthdays REALLY overwhelming.  I wish I didn't ...
One of the things that I actually enjoy about the kid's birthdays, is making their cake.  Oh sure ... while I'm deciding what to do, I freak out a bit.  But once I start building it ... it's therapeutic.  I so enjoy the creative process.  And I always make the cake the night before the party, so when the kids wake up in the morning, it's sitting on the counter and they go crazy.  I love that *smile*.
Mattias had a "scavenger hunt" birthday - not a "pirate" one.  I say that, because everything to do with "maps" and "treasures" is pirate.  Fair enough.  But Tias really doesn't like the skull and crossbones ... so when I was coming up with cake, I decided to google search "treasure chest cake".  And wow ... so many fantastic cakes came up.  The perfect way to pick and choose what I did.
So ... here's how I started:
I baked a 9x13 white cake, and a 3x13x4 (or something like that) chocolate cake. 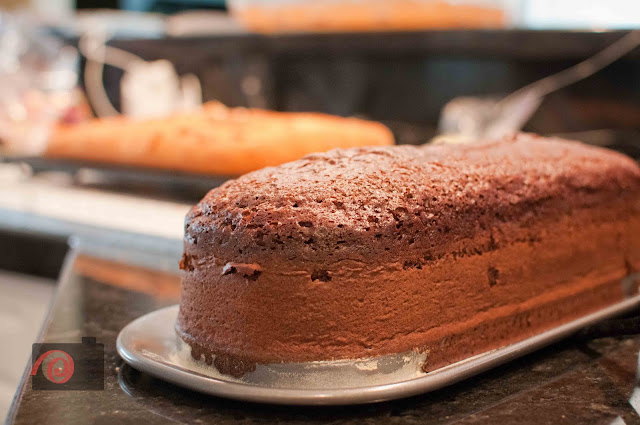 After staring at the cakes for about 10 minutes - afraid to make the first cut, I sliced the rounded ends of the chocolate cake off.  Then cut them on the diagonal. 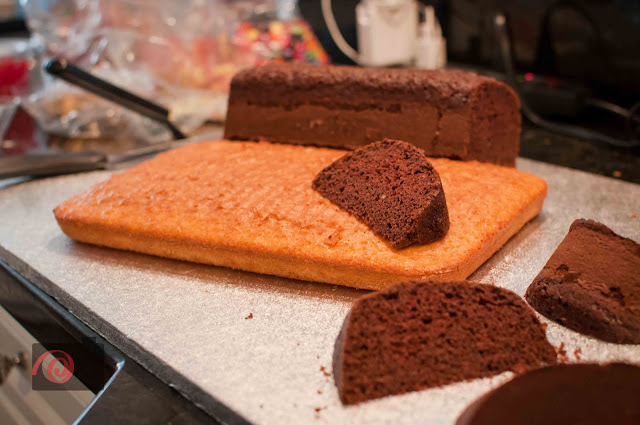 I cut the chocolate cake in half, and slipped the wedged in the centre of the cake - to act like a hinge.  I had seen this on youtube ... brilliant. 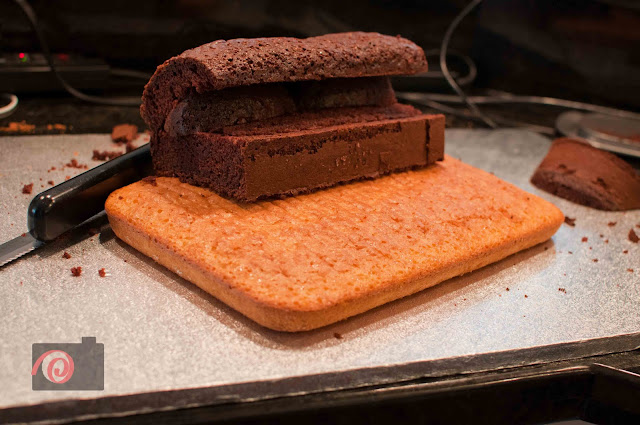 ... it was way past his bedtime ... but he was hoping to lick the chocolate buttercream frosting bowl.  No such luck ... time for bed, Tias *grin* ... 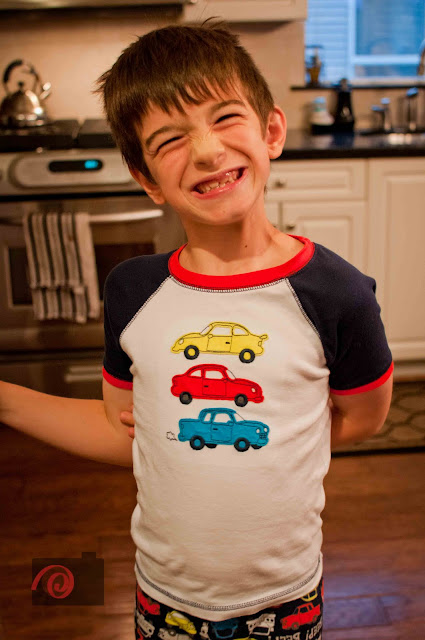 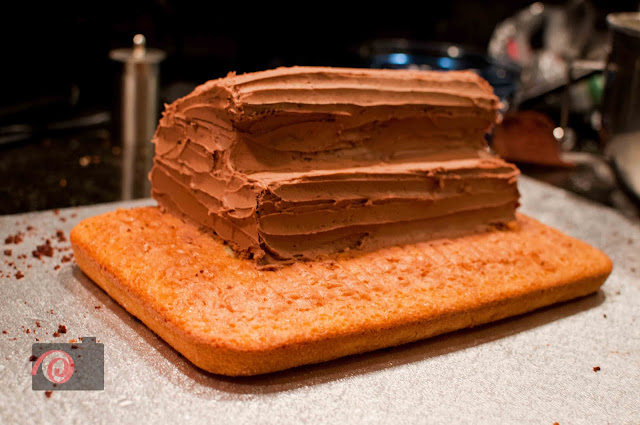 I had a bowl of chocolate frosting - so I added blue gel cake tint, hoping that it would work.  It turned int an bluey/green ... good enough. 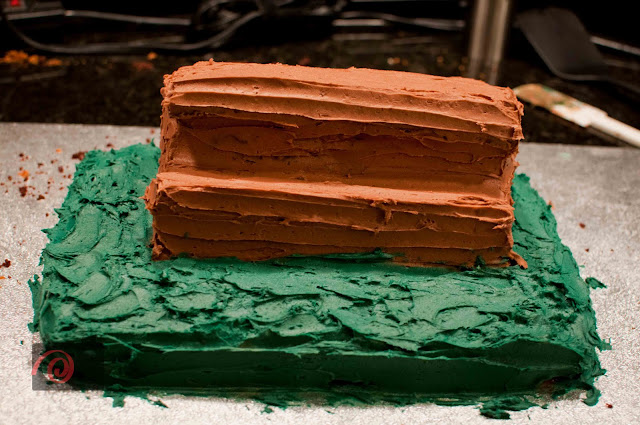 Out came the bag of smarties.  I had seen fruit leather used for the "leather bands".   But I didn't have any ... so brown smarties it was. 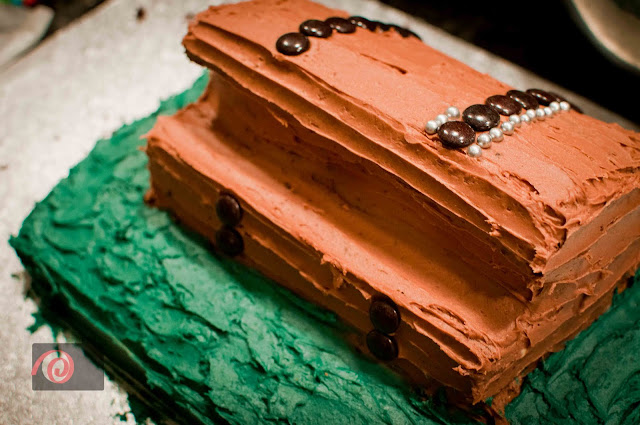 I had these silver balls left over from some other cake I did ... they were a pain to work with.  They would slip from my fingers, get into the green icing, and I STILL (two days later) have green finger tips from attempting to remove them *grin* ... 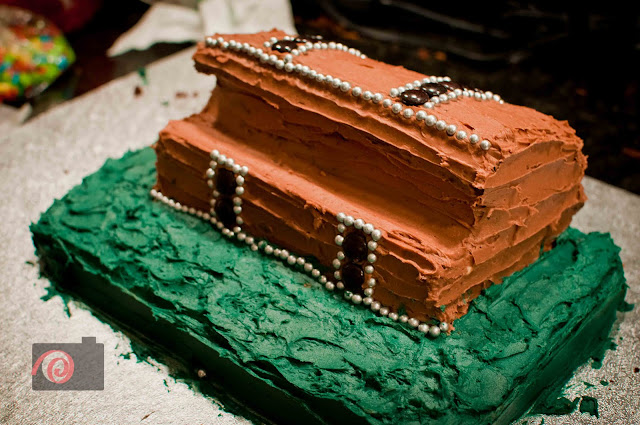 I had bought a TON of different candies that I thought I'd "fill" the chest with.  But it wasn't very deep ... so I just started placing the chocolate coins in to start with. 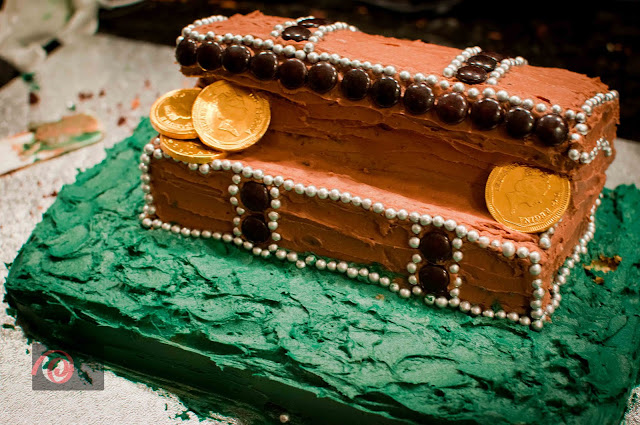 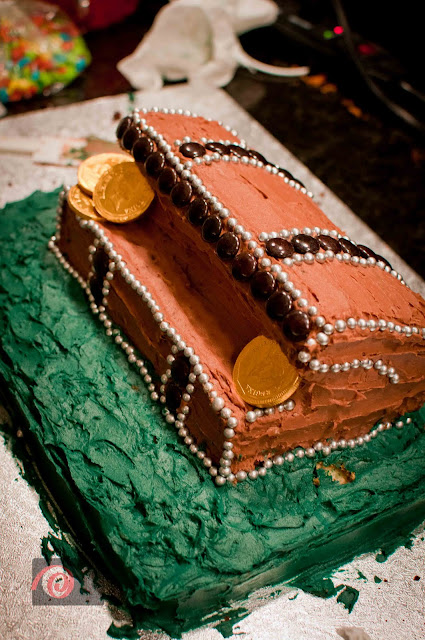 I had bought four candy necklaces, but decided to only use one.  Then - with the left over wedges of cake, I created a "7" and filled it with the left over stars I had for Josiah's "Toy Story Cake".  I used a red gel script icing pen to write "happy birthday" and voila.  A treasure chest cake. 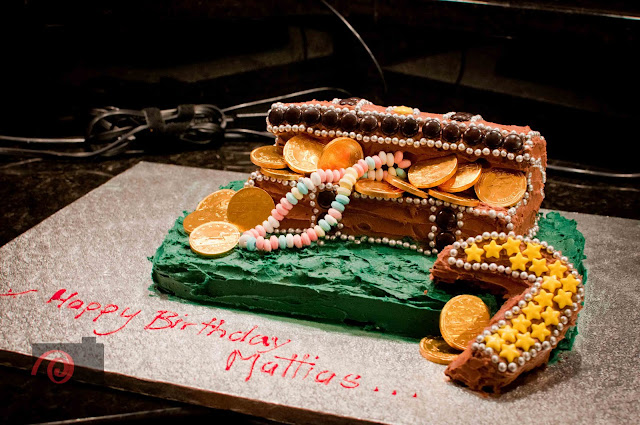 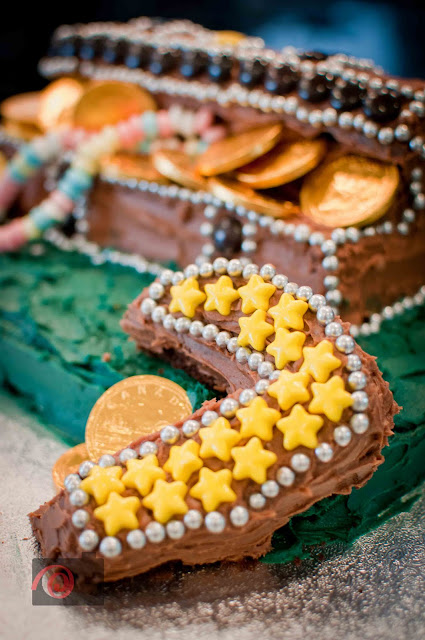 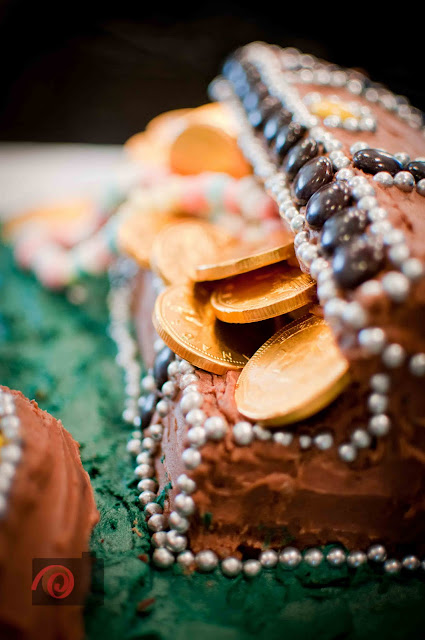 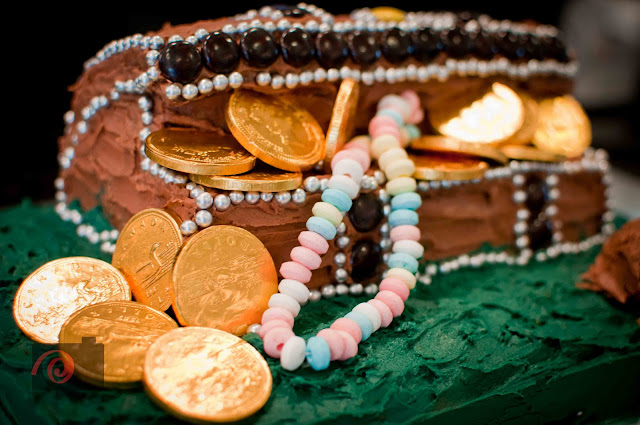 I love details.  So, I would walk away from the cake, come back - look - and think of more details.  Like the yellow "buckle" smartie. 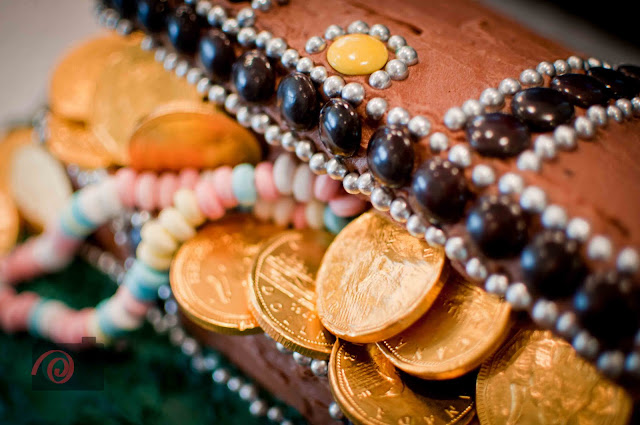 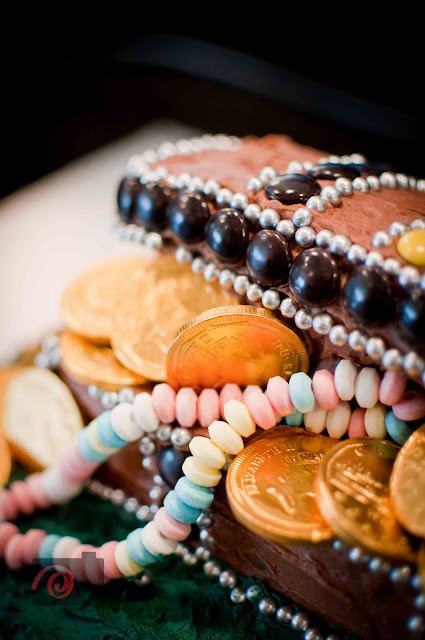 I added more silver balls, more coins ... until there was nothing left to do. 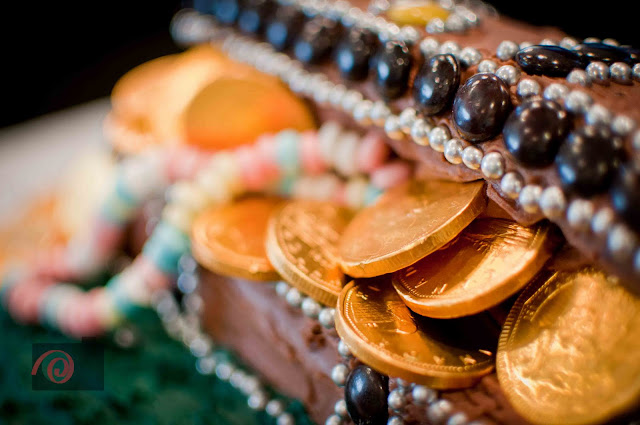 It was far than perfect.   Wobbly, not straight ... but I made it with love *smile*. 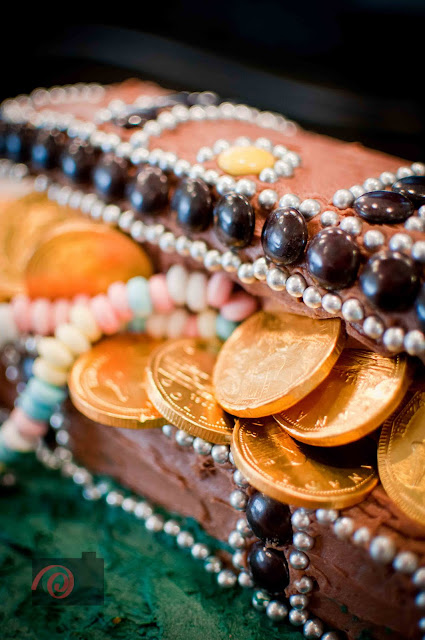 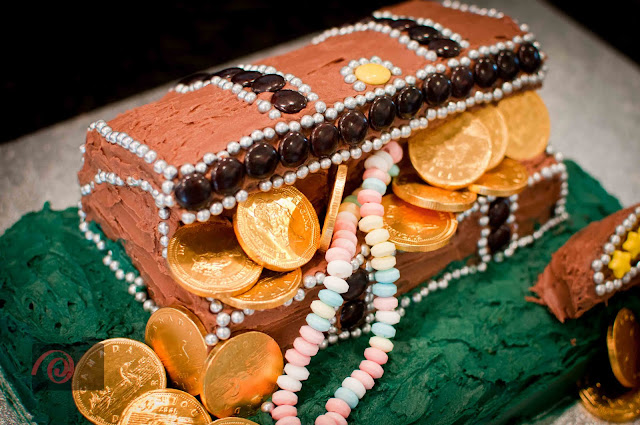 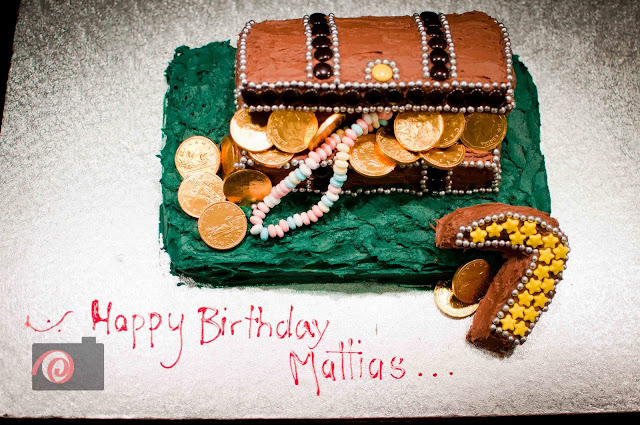 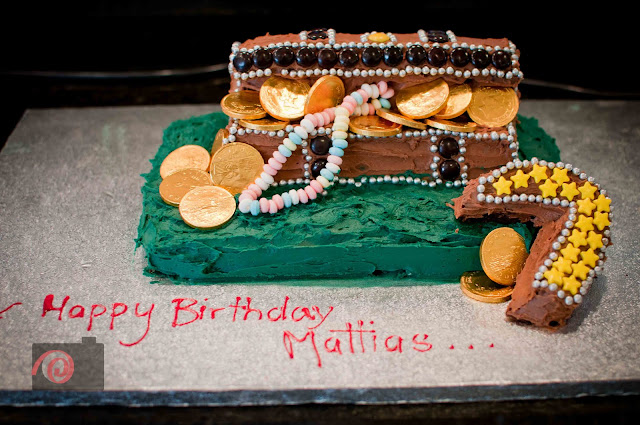 So.  There you have it.  This year's "Treasure Chest Birthday Cake" for Mattias' 7th birthday.  And I won't have a very long break before the next cake creation ... Katia's birthday is coming up in two weeks.
Here we go again ...

Love it! Might have to get some tips come November, we have a pirate birthday in the house ;)

Looks fabulous! What a great job. And I love the play by play!

I love this. And I love that you use buttercream. So much tastier! Am working on similar for son's 5th tomorrow!