It's so hard to believe that was  four years ago ... and here he is, my little man, full of spunk and light.  He's the witty one in the family ... he's super intelligent and knows he has the charm to knock someone's socks right off ...

And here it is, February, and we're finally getting around to his kiddie birthday party.  I've had to remind him that he's not turning five *grin* ... he thinks he's having another birthday, rather than just a late party.

Every birthday, for every child, I try and create a special cake.  Now - this is just something that I just decided was important to me ... I am far from a cake decorator.  I've made an aquarium cake, a broken road Cars cake, a Cars racetrack cake, a Mack the Truck cake, a ladybug cake ... and they are all special to me - despite their obvious imperfections.

I should preface this, with fondant and I are not friends.  I know moms who create the most spectacular cakes with fondant.  Me - I prefer buttercream frosting and props.  I find it so much easier ... because it is *grin*.

Josiah's party theme is "Toy Story" ... I had to persuade him to change his mind from Cars for the third year in a row.  But coming up with a cake made my brain hurt.  Because my skills are limited, I like to create "scenes", rather than making a single character ...

I decided to try and create Andy's bed ... and cut the edges of the vanilla cake, to make a square and use the leftover pieces to make a pillow.  Then I cut the chocolate cake in half to make the head and foot board. 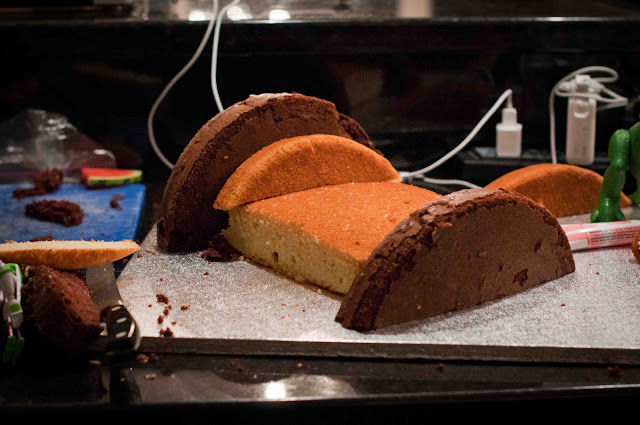 ... as soon as I did that, Josiah was crazy excited.  He loves watching things being created out of nothing. 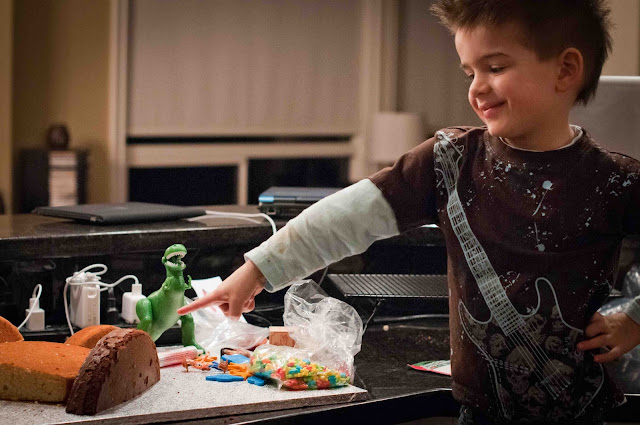 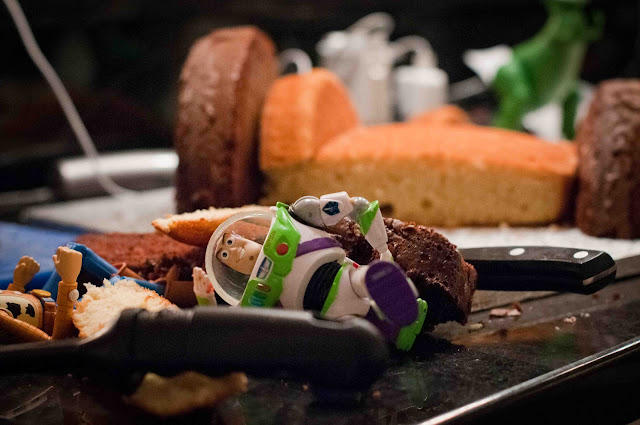 I made some simple buttercream frosting and tinted it blue for the bed cover. 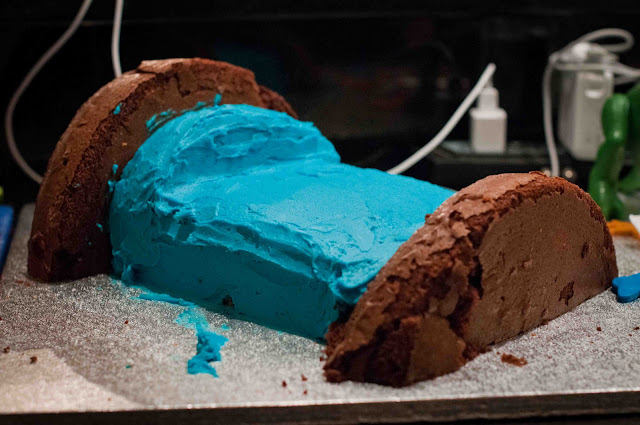 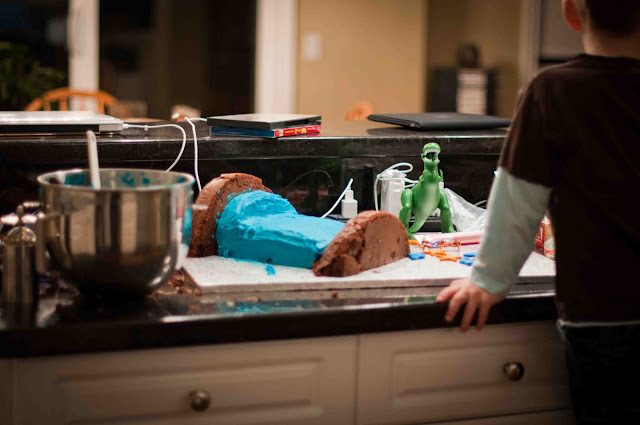 I made another batch of buttercream frosting and melted chocolate wafers to turn it into yummy, brown chocolate frosting ... and then I grabbed the bag of coloured star candies that I bought at Scoop and Save (and had no clue what I'd do with them at the time ... ) and began a pattern for the bed cover. 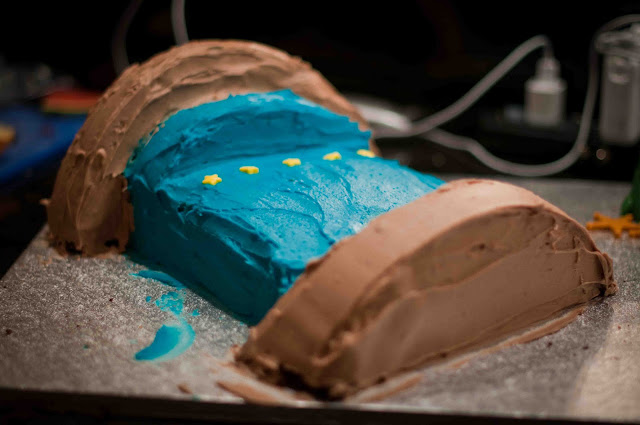 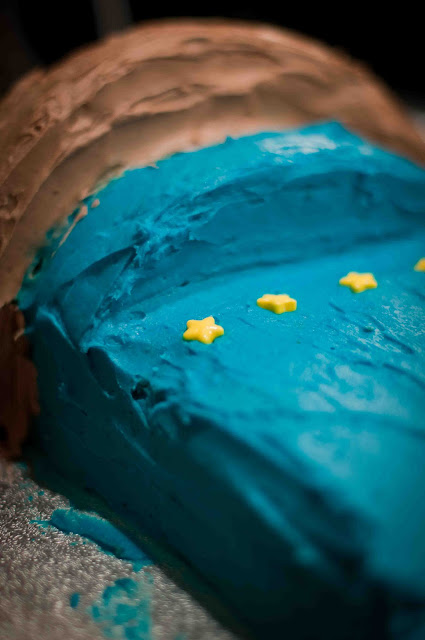 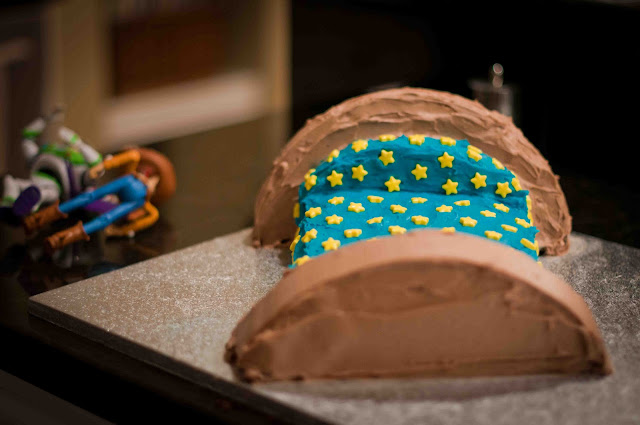 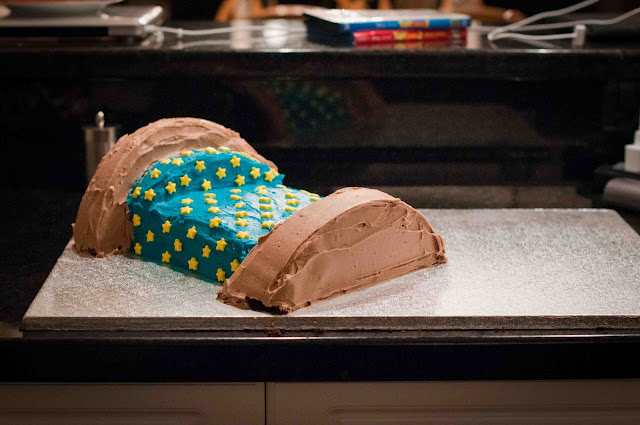 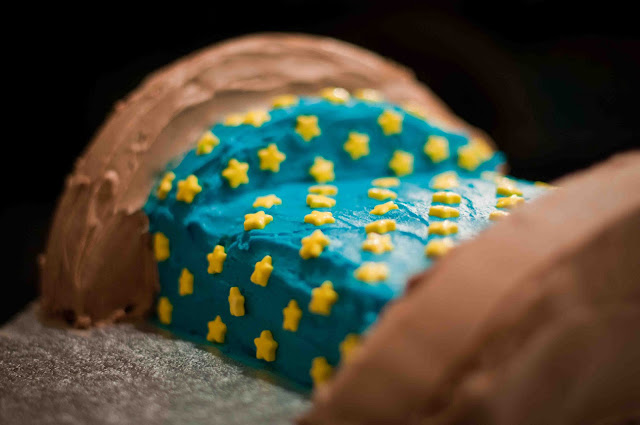 Then out came the props ... the Woody, Buzz and Rex are Siah's and the star badges and Bullseye were borrowed from a friend ... 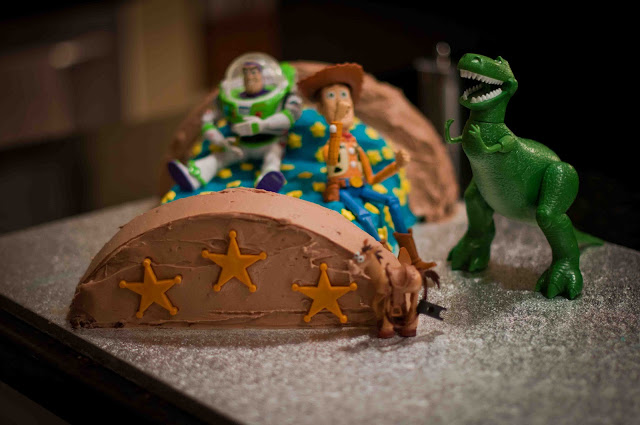 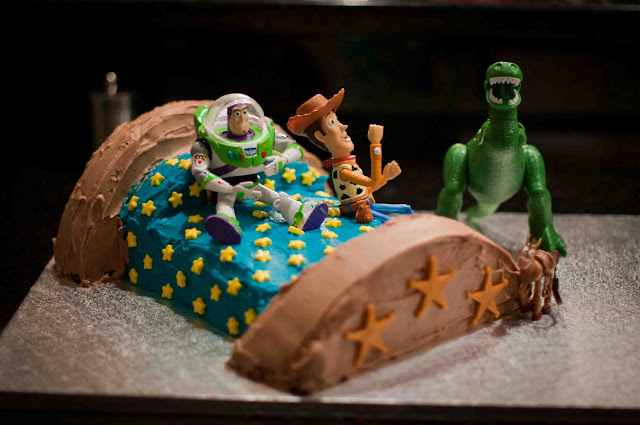 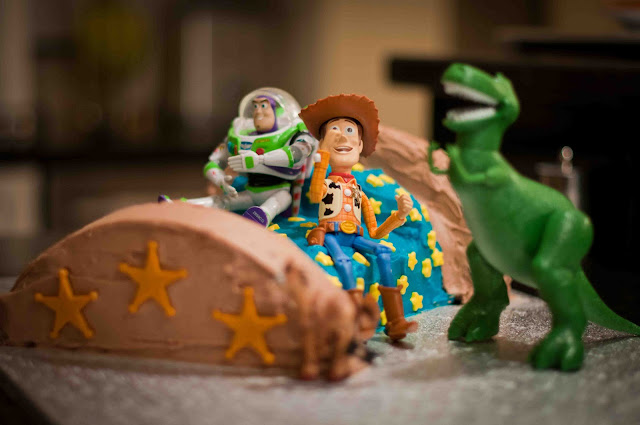 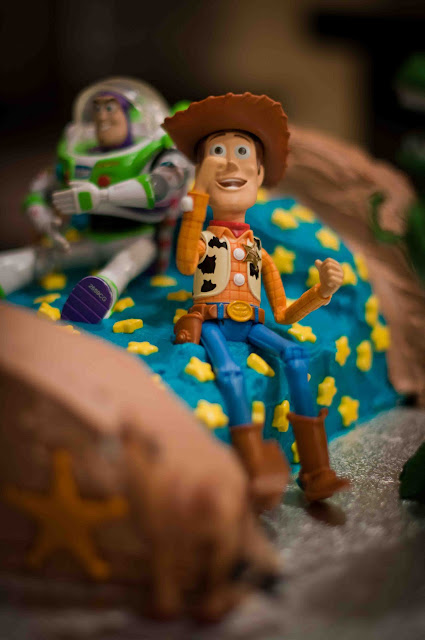 I added the candles, looked at the clock and realized that it was late as I was finishing up the last details. But Josiah and Mattias were desperate to see what it looked like ... so I let them out of bed *grin*.  It's not like they were going to sleep any time soon ... 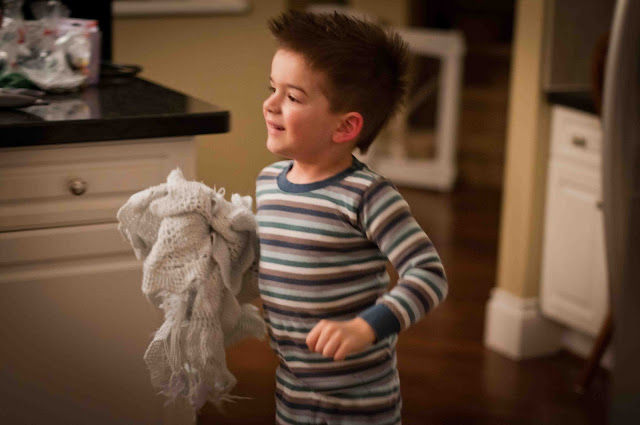 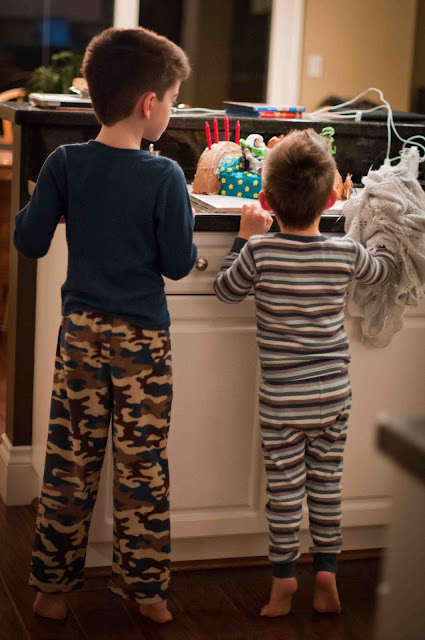 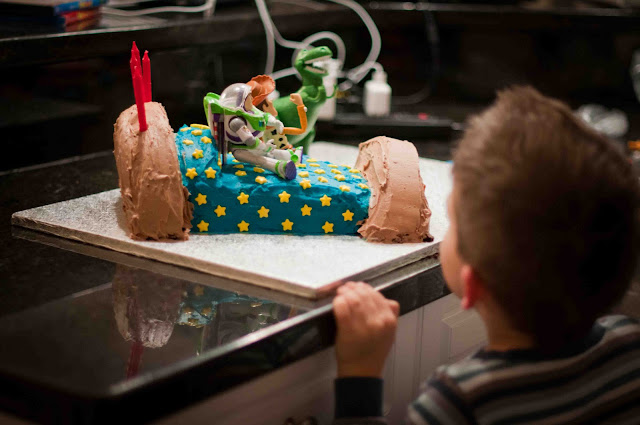 I had some black liquorice strings ... and I thought it would look good to outline the edges (totally a quirk of mine).  The liquorice wasn't soft, though ... and a bit twisted - it didn't really want to do what I wanted it to ... and the lines it made weren't perfect.

But hey.  It's a FOUR year old's bday cake, not a wedding cake, right?? 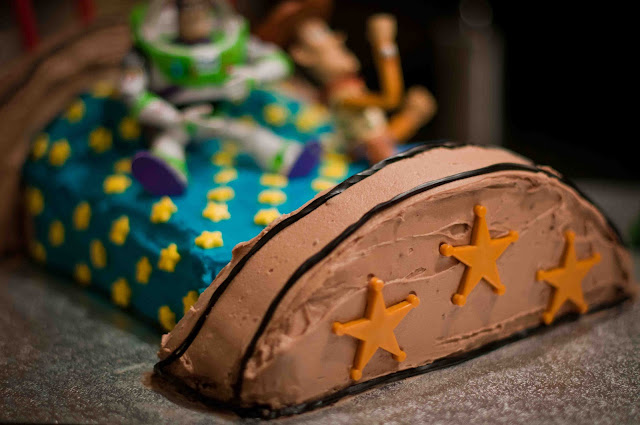 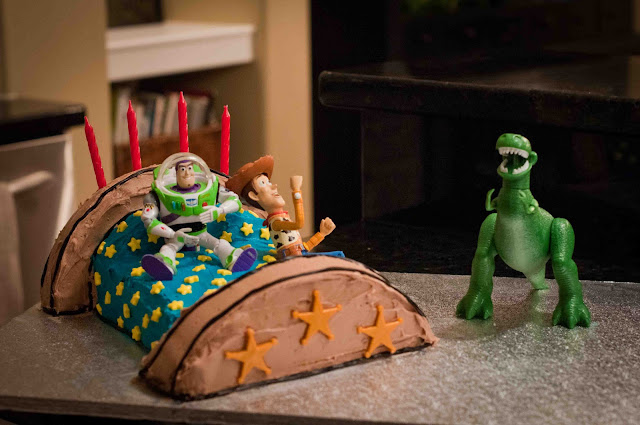 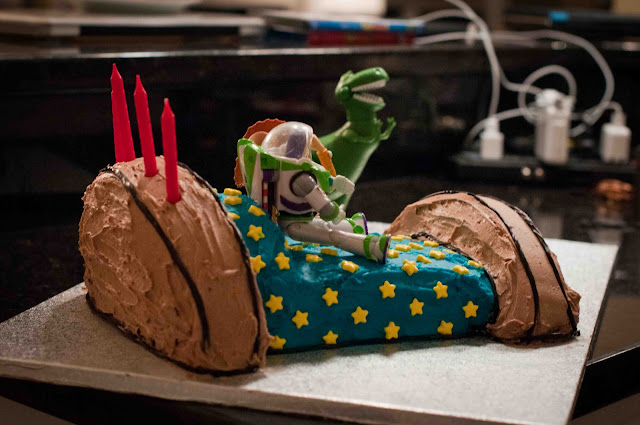 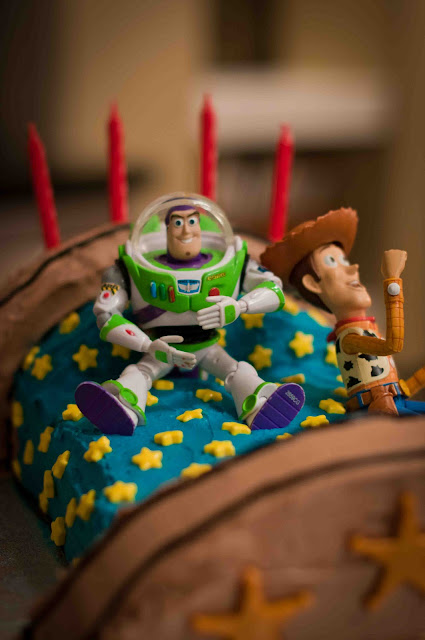 ... then I added some writing, "Happy 4th Birthday Josiah" in red gel. 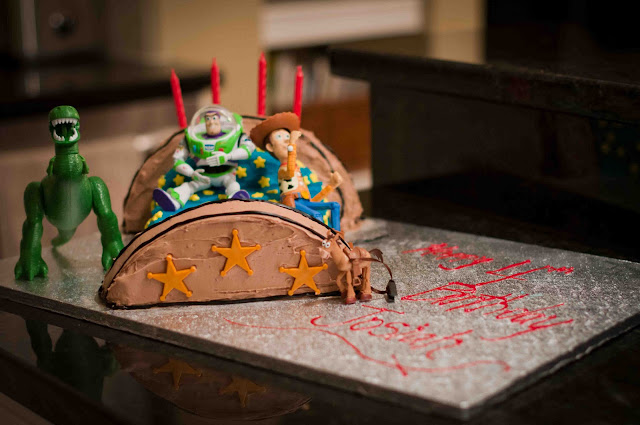 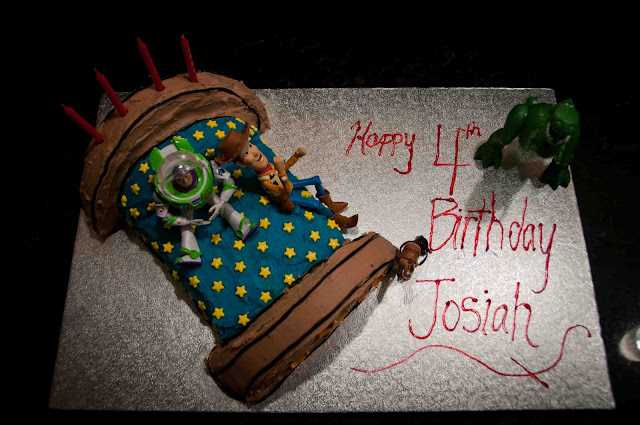 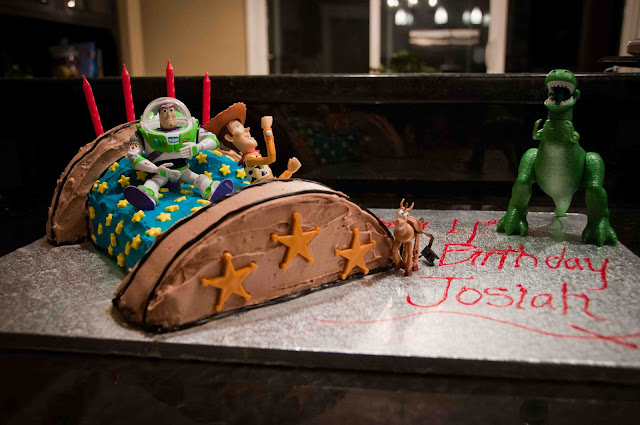 I say this every time, but I think this one's my favourite.

Happy birthday, Josiah - again *grin*.  Now, Mattias is saying he wants a Bayblades birthday cake ... oh dear.  At least I have until August to figure that one out *grin* ...

That is SO great! You always manage to out-do yourself on these cakes!! Phenomenal... Again, I am in awe :-)

That cake is AMAZING! Love the hearts at the header of your blog too. I havn't commented for awhile and actually havn't ever met you in person, but remember your worship leading in Langley and Maple Ridge, where we used to live :0)

Oops, Chris is a geek is my husband. This is Caroline.

The cake looks great! way to go girl! Recently I made a toy story cake for my youngest brother for his birthday you can find it on my blog. Thanks for sharing the cake with us!

Great cake!! I was wondering about how many servings did you get out of the cake?