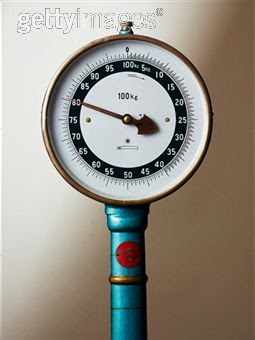 One of the most difficult parts of having a new baby, is dealing with "when do I stop wearing maternity clothes and shoe-horn myself into my button-up pants??"
I know that there are some of you out there who have never had to deal with this ... after birth, you wore your Lulu Lemons for a week before you tackled your skinny jeans ... so unfair *smile*. This is NOT how my body works.
Katia is 4wks old tomorrow. And it's time to begin.
I gained 45lbs with Katia. How thankful am I that I did the "biggest loser" last year and lost almost 20lbs before getting pregnant!! But that almost made gaining the weight even harder - especially after buying those cute clothes with my GFs in Phoenix ... So - let's do the numbers here ... I was 129lbs when I got preggo ... gaining 45lbs made me 174lbs (you've GOT to be kidding me ...). I weighed myself today and I was 158lbs. My goal is to get to 125lbs by March ...
I'm a big believer in nursing, if you can. SO - I'm not prepared to cut all my carbs and white sugar and drop the weight quickly. Instead, I've got a different plan that I'm wanting YOU to hold me accountable to. Why ELSE would I put my weight up on a blog??? *GRIN* (which I think is funny when people are scared to say the "number" the scale says - when everyone can plainly see if someone has gained weight or not ...)
So - here's the plan: now that my body is almost completely healed from Katia's delivery, I am increasing my exercise schedule (mainly, just going for walks with the kids around the track at Tias' school before/after pick up , or playing the WII with Tias ... nothing too crazy ...). I will be drinking large amounts of water. And I am going to start watching WHERE my calories are coming from. Because of nursing, I still need to feed my body - but now I have some energy, so I can prepare better choices instead of grabbing pre-packaged junk ... And I actually reread one of my posts for some hints on how I did it before, to motivate and reboot how I think ...
My weekly goal is to lose 1.5-2lbs a week. I will be weighing in on MONDAY MORNINGS, and posting the details of that here. WHY? Well ... I can't see you, first off *grin* ... and secondly, it's cheaper than joining some other group that I'd have to pay to have the same pressure. And I'm determined to do this.
So. If I am able to do that, without comprimising my nursing, that means I will lose 26lbs in 13weeks (the week of Christmas). THAT's some wishful thinking, huh?? Pretty sure that won't happen - but I would be thrilled with 15lbs at this point ... My doctor reminded me that it took 9 months to gain the weight ... and so it should take 9 months to get it off. UGH.
For added inspiration, I'm watching the REAL "Biggest Loser" - although, for some reason it makes me hungry. I'm going to attempt to do Pilates during the commercials to start with (I have NO core right now ...). I watched the season opener last week and was SO brought to tears with Abby's story of massive loss in a 2006 car accident ... read her bio here and then go hug your kids & hubby ...
SO - WHO'S WITH ME?? Anyone else out there who wants to lose a bit of added "summer BBQ weight"? It doesn't matter if it's 5lbs or 35lbs. You can post your starting weight in the "comments" and post every week along with me ... don't make me do this alone, friends!! You can even post a "before" pic ... hmm - maybe I should do the same? And - for my preggo friends - you can be a part of this - by watching how MUCH you gain (refraining from gaining too much), and posting what you did for exercise that week, or healthy snack choices ...
Ok. Let's get this party started. Fingers crossed ... I've already brought out my skinny clothes *grin*.
Posted by Tawn at 9:16 AM

Email ThisBlogThis!Share to TwitterShare to FacebookShare to Pinterest
Labels: [be challenged], [biggest loser]

'll do this with you, Tawn.

I did actually step on the scale and, *gulp* my number is 197lbs.

I'm hoping to get under 180 before Christmas.

I am definitey interested in losing the weight, but can't bring myself to publicly acknowlege how much I actually weigh - mainly because I don't want your Mom and Dad to know - silly, I know. BUT - I can post my weight loss each week....and this would be helpful to me.....

I'm almost 15 weeks preggo now, and really trying to watch! It was easier in the first trimester when I didn't feel well so I craved healthy foods. Now that I'm feeling better... it's somewhat dangerous! I don't let myself believe in the "eating for two" thing... it's not 2 adults! ;) We don't have a scale at home, so I can't weigh in weekly, but I am looking forward to reading your entries and be motivated!
One thing I do is only bring healthy snack to work - then I don't have the option of eating something bad all day! Fruit, veggies, salad-in-a-bag... that sort of thing :)
I look forward to reading tips from others!

Being that I'm well into my pregnancy with my third baby, 17 weeks now, I'm looking at ways I can incorporate exercise into my every day so that there is LESS to burn off after baby :-)

Today I walked to school to pick up my kindergarten girl, then my girls and I all walked home (up hill pushing a stroller)!

The mornings my kids are both at school I'll be doing a prenatal pilates video I have.

This has been in the back of my mind ALL day because I really need to do it. We did our own biggest loser this time last year and I managed to take it out losing 12kg in 10 weeks. Over the last 12 months I have put every single one of them back on and am so annoyed at myself!
Summer is just round the corner then next July I am going to be bridesmaid in Canada so it's time to do this now!!
Scary stuff...my 'before' weight is 152lbs (good old converter, we work in kgs over here =) ) and I hope to get to about 125lbs long before July! Here goes!! Good luck =)
Julia

Well I've been trying to find the motivation to start the Biggest Loser for some time now, you know how it is...well tomorrow I'll start but tomorrow seems to never come! lol So I'm in, the more help and motivation the better! Not exactly sure what my number is on the scale but needless to say it's bigger than what's been posted here, lol, I'm a little scared to put it up on here!

Ok, so after reading your post today (Sept 24) you were saying about how we are anonymous so I thought I would post my weight, I just weighed myself and it's just gross: 248lbs! Ahh! How did I get there! Very easily in fact! I have had 2 babies but I did not gain any weight with my pregnancies, in fact I lost weight both times! So now I just need to keep from introducing myself to you at church so I stay hidden! hahaha Thanks for the inspiration!

I'll participate, but I'm going to have to go anonymous for now. Maybe once I reach my goal of 150, I'll post who I am.

But for now, I will remain anonymous and say that this morning I was 174.5 (love the digital scale). 5 pounds down so far, 25 more to go.

I'm also pregnant, but am trying really hard to not gain much weight because over the last year or so, I gain back the 20 pounds I'd already lost. So, I really shouldn't be gaining much weight for my pregnancy. Right now I weight 151. So sad. I haven't gain any weight my first trimester and am trying to keep it the same with lots of walks and pilates.

Thanks for the encouragement with your blog!!

I worked out 3-4 days a week my whole pregnancy with Tanner. I even worked out on the eliptical machine quite vigorously the day Tanner was born. I still gained 36 lbs.

I am nursing and hungry all the time and not making good choices with my eating. I am starting to keep a log TODAY of what I am eating/calories and exercise. When I did this before, after I had Sophie, I lost 30 lbs!