When I was younger, I chose to go to a private school rather than have my teeth straightened. Nobody really thought my teeth were all that bad, but I have always been self conscious about twisted teeth and "fangs". I've adapted my smile and such so that it's not as noticeable but, for me, it's something that I always thought about when I looked at photos of myself.

After I lost our last baby in February, I decided that I was going to use my time "wisely" until we decided we would start trying again. I couldn't have the needed x-rays while I was pregnant, so when I no longer was, I made an appointment with a local orthodontist.

My first quote was upwards of $18,000+ (depending on all that I wanted done). This did not include x-rays or retainers. This doctor also recommended my jaw be broken and wired shut b/c my upper jaw and lower jaw are "one tooth off" and the lines do not line up.

Um. Ok - so that was not an option. A stay-at-home-mom with her mouth wired shut is a recipe for disaster.

I went to another local ortho, and this time I was introduced me to "Invisaline". Basically, they look like "teeth whitening trays" and are removable for meals and brushing. They are supposed to be in for at least 22hrs a day (so, that's basically 2 hours for eating & brushing). And I was quoted $6700 for everything: trays, x-rays, mouth guard and retainers.

I gave it a big thumbs up!

So - little "bumps" were sodered onto 5 of my teeth - little niches where the trays click on to, and where the most pressure was to be applied. When I insert new trays, it simply feels like someone is pushing on my teeth. The very first set, though, was very painful and made me feel claustrophobic - but that passed within about 48 hours. I rotate my trays every 2 weeks - and am almost done my lower teeth with having 9 sets of trays (18weeks, essentially). Only 4 weeks to go!! I go to the ortho every six weeks to receive the next 3 sets of trays, and have them inspect that all is going well - and at my next visit my retainer will be put in behind my lower teeth and they'll be done! 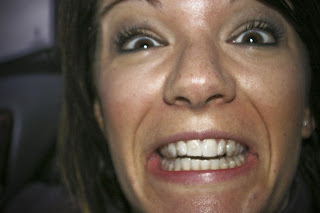 Here's a pic with my 2nd set of trays in .... not the most flattering pic *grin*. I was in New York and taking a bunch of Advil because they had moved so much with the first two sets. You can see the bumps (I hate that it looks like there's food on my teeth) - though most people don't even notice I'm wearing them. I don't usually walk around with this ridiculous look on my face. And as of late, I've had to take them out to sing. Apparently my "s"s are a bit of a microphone nightmare *GRIN*.
It is SO exciting to see the changes ... Even just looking at this pic, I can see how my bottom teeth have straightened and although I'm only half way through my top teeth, they are moving and creating new spaces and such as they find their right place.

If you're interested in knowing more about it, just ask ... and I can give you the information on my local orthodontist as well. One thing to note, is that not everyone is a candidate for Invisaline.

My sister used Invisiline and it worked like a charm!!!

i can so relate to your reasons for wanting to change your teeth. i'm glad you were a candidate for Invisiline - sounds like a relatively painless, quicker, less obvious way of getting the job done. one note though - i hate my behind the teeth lower retainer! it is so hard to floss with that thing stuck there! will you have a retainer for the top teeth too? thankfully i have one that is removable for up there.
by the way, i think that pic should be your Facebook profile pic. ;)

I have a friend who did this and has been so happy with the results. She also found she lost weight b/c of having to take the trays out to eat and was it worth it for just a snack. Expensive way to lose weight but hey, straight teeth and a new wardrobe needed! Hmmm...I might want to try this!!