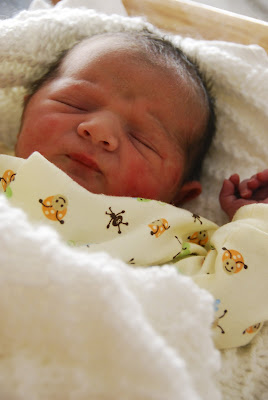 Pink. A colour I never thought would be a part of our home ...

On Wednesday, August 26th I had a routine doctor's appointment at 10am. I was curious as to whether anything was "happening", as I had that low, groaning pain for what felt like weeks.
My doctor decided to contact the hospital before he did any checking - as he didn't want to start something if there wasn't any room for me at the hospital. Well - he got the go-ahead, and so he checked. I was 3cm dilated and my waters were "bulging". Sorry for the word picture, but that's what he said *grin*.
After inspection, my doctor said, "Look - it's going to happen in the next couple of days. I don't know how fast you could go into labour, but I would rather have it supervised than have it happen and you not be able to get to the hospital. I think we should book a room, and I'll break your waters and we'll get you to have this baby."
Um. WHAT?? Ok ... my heart started racing ... KNOWING that I'm going to choose to go into the most intense pain?? But it did have it's strong points. Like, I went home, packed our bags. Our boys got to see me NOT in pain, saying, "Ok - the doctor says it's time to go the hospital and have the baby!!"
Mattias was crazy excited, running around the house singing, "We're gonna have a baby. We're gonna have a baby!"
My friend, CW, came and picked me up ... went to the hospital (after waiting for what seemed like the LONGEST train to go through our town ...). My hubby met us there, as did our doctor. Out came the "hook" ... waters broke and the games began. That was at just before 1pm.
Labour didn't start immediately, but once it got going it was *cough*, intense. Labour started just around 3pm. By just before 4pm, I was 7cm ... and was stuck there for what felt like a lifetime (about an hour).
I chose to have no drugs, not to be a hero. But because they can sometimes slow things down, and also I've found that they don't always make things pain-free, but rather just make me feel loopy and out-of-control (while still feeling all of the pain ...).
By 5:20pm I was 9.5cm. Can I tell you that I wanted to jump out the window and make the pain STOP??? The doctor was so patient, and I was begging him to get "this baby out of me". So I was to lay on my side to convince that last half centimeter (which pretty much made me lose my mind ... and my poor mother-in-law had to hear me utter some choice words *grin*). Then, at 5:29pm, I was up on the bed - ready to push ... feeling like I really didn't want to do this anymore ...
Katia (KAH-tyah) Rose was born at 5:34pm, in all of her glory - and my hubby shocked me with his cry "It's a GIRL!!!" and his hand shooting up in victory. Honestly - I didn't care ... I just wanted some reassurance that it was over *grin* and some pain medicine. My body always goes into shock after having a baby - getting the chills and the shakes ... but so worth it ... obviously!
She was 7lbs 6oz (our boys were 6lbs4oz and 6lbs12oz ... ) and 20inches long. The doctor said that she was between 2-3 weeks early (which would've given me the Sept12 due date that the ultra sound had given me ... ). I asked if he regretted starting the process, and he looked at me and said, "Oh, she would've come within 24 hours ... this was a much safer way to have her."
Here's a family pic, when Katia was about 2hrs old. 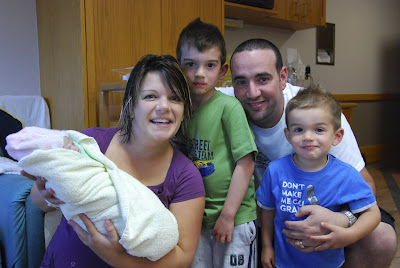 Our immediate family came to celebrate with us ... we ordered pizza & pop and basically had a bit of a party in the room (um, after I showered and such ...).
I had a good cry in the shower ... a daughter. I couldn't believe it. And it wasn't like I was secretly praying for a girl ... I wasn't. But as soon as I could process it, I realized that God knew what was best for us ... and how the "what ifs" of Shalom would no longer weigh on me.
Katia is not a replacement for Shalom, just as Josiah wasn't. But the fear I had of being an old women, visiting Shalom's grave, wondering what it would've been like to have my daughter ... well, those cobwebs lifted on August 26th.
I have so much more to say ... but there's time for all of that. Thank you to you all for your love and prayers ...
Posted by Tawn at 2:56 PM

Tawn, what I continue to learn again and again through my own journeys is He gives and takes away....and just as P. Brent spoke of in the message yesterday prayer is powerful and the blessings of being persistent - event when there's delay - are so worth it! God knows the desires of our hearts and He knew what you needed to have all those "cobwebs" and "what if's" lifted away forever!
I'm truly joyful for you and your new little family of five. Can't wait to see how the house is girlified as the weeks and months go on :-)

Fabulous - what a delight to have a daughter to love on!

Gorgeous!! What a beautiful family, perfect with the addition of sweet Katia.
Congrats to you and your boys! Have fun with all the pink, ribbons and bows :)
God is so good, all the time.

Congrats! You are going to love all the pink that has entered your life:) its amazing having a daughter!!

Thank you for sharing! I'm still wiping tears from my cheeks!
You have been on such a journey... now with old chapters closing and new ones beginning my heart is filled with Joy for you and your family!

Hi Tawn- Thank you for taking the time to share of the arrival of your beautiful daughter. CONGRATULATIONS to you & your family! Can't wait to meet her!

I am so happy for you!! Your words are beautiful, as is your family =) Can't wait to meet your wee ones next year!

Congratulations! Little girls are so much fun. Fun to dress, fun to fuss over and really fun to shop with when they get older!

Ah, Tania. Your heart must be so full and so at peace between nursing sweet Katia and kisses and cuddles with the boys! Congratulations!!!

Blessings to you and your family as you learn the loveliness of having a daughter!! Thank you for sharing your story...God truly loves to give us the desires of our heart, whether they are known or unknown. God bless you!

Congrats!!! I am a bit of a blog stalker =)
I just had my little girl in May and as my husband said to me " Pink is the new Black! "
Welcome sweet precious Katia!

Welcome wee Katia Rose! So glad she has arrived safe and sound! What a blessing....and you are now a family of five...can you believe that?!