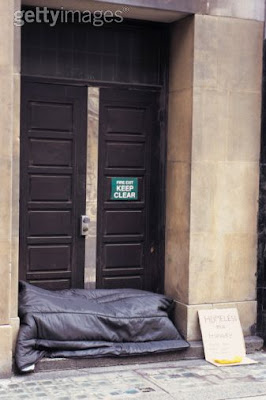 A few years back, I went to a weekend-seminar-type-thingy to learn some compassion. Seriously. Now, those who know me - that might make them smile. See - for those of you who don't know me - I'm a pretty black n' white, logical, "you make your bed, you lie in it" kind of person. Compassion has never been my strong-suit.
This was all before Shalom when I learned that God is a God of gray too; not just black and white.

But at this seminar, a question was posted to me that was brought back to my mind today as I was reading our city's paper. There had been an article about a homeless man, ridden to a wheelchair, who had been murdered while seeking shelter at an elementary school over the long weekend. Apparently, there are over 100 homeless people who need the same thing throughout the week.
The city's MLP was stating that they needed more shelters to protect these people from the elements and harm. And I think that MOST citizens would agree to this - get them the adequate housing, keep them off the streets and away from harmful behaviour - do it.
So - what was the question? It was this:
"If you found out that they were tearing down the houses across the street to build a homeless shelter, would you object? What if they were building Government Housing? Social Assisted Housing?"
When this question was posed to me, my first reaction was, "YES!" Why? Well, all the stereo-typical scenarios came flooding. Drug abuse. Alcohol abuse. Graffiti. Theft. Loitering. Littering. Violence. Domestic abuse. You name it, I thought it. I have small children. I have money invested in our home. I have a quality of life that I want to sustain.
So - as I read the paper today, I found myself saying "YES - we NEED more social housing. We need to give the sick, the down and out, the lost - a place to be safe."
But, even now, would I want it built across the street?
Makes you think, doesn't it?
Over the next few days, I am hoping to stretch myself in front of you - as to what it is to be generous, to be compassionate, to be as Christ would be. Please come back as your thoughts will hopefully spark an honest discussion about our generation, our financial security and what we are called to do for our fellow man.
Posted by Tawn at 3:02 PM

Email ThisBlogThis!Share to TwitterShare to FacebookShare to Pinterest
Labels: [be challenged], [shalom], [talk]

Time and a life of lessons have taught me many things one being this.....
Most people wouldn't want "that kind" of housing development close to there home but when you think about it, it’s your opportunity to truly trust that God will protect your family from circumstances if you will be faithful and show "those people" Jesus.
I attended a school as a child that bordered middle class and lower income houses I met all sorts of people. My parents used this as an opportunity to teach us about others who are less fortunate and our home always had an open door to anyone that needed help. It’s not the exterior of a person that God looks at just as we should not look at the exterior of people around us; there clothes, there home. People may judge and ask why you'd want to live in that area or why you haven't sold your home or even talk poorly about you to others, saying its all you can afford....yes we're human and it hurts but is it better to comfort a bruised ego or a shattered heart.
The answer comes pretty easy if you look at it that way.

I currently live in a very economically diverse neighbourhood . Consequently, there are different sorts of families all over - everything from upper class private schools to households that require social assistance. There was one child that often showed up early on a summer morning looking for my boys. We always invited her into the backyard - they played nicely enough. But she always hinted for juice or food or treats and I would always give them. But after sometime I felt irritated by the one sided constant giving. And I KNOW - She was a kid, but there was just this way that sort of irked me. I had just given the kids a juicebox and then headed downstairs to the "laundry dungeon" to switch over a load. As I sat to fold what came out of the dryer I was hit over the head with Jesus telling me "Whatever you do to the least of these, YOU DO TO ME - Janean. Yeah you Janean - to ME - Jesus." Well, I cannot even tell you. I weep as I write it now. I wept then and it was life changing. Not only should we consider that we are the only Christ some will see, we need to realize that everything we do, say or even think about the marginalized we are doing, saying and thinking about Jesus. As parents, we are required to protect our children from obvious harm, but oh, the gift we give them when we explain about how Jesus expects us to treat and feel about the challenged in our society. Regardless of the choices that led them to that point. Amen to Grace for those that don't know Jesus. AMEN to Grace for those that do. PS - God also gave me a heart of genuine love for the wee one that used to irritate me. I KNOW - But I thought that I would offer up some transperancy in response to your blog that constantly both blesses and challenges me. Janean

My thought is this: Is a roof over their head what is 'most needed' by many of the homeless?

I wonder if there are mental health issues that must be first addressed before some of the homeless would even consider or feel comfortable about or be able to live in 'social housing'. Sure the government can award contracts and look great about building lovely housing. But what about programming and support to help the homeless learn to live within society, or help to work through hurts that may have contributed to people becoming homeless, or perhaps some people are homeless because they feel safe in their anonymity. I am fairly certain that a fair percentage of 'homelessness' isn't just about needing or wanting a roof.

How many times have you driven by or walked by a homeless person asking for money? I have many times, because I ask to many questions in my head. What will he spend it on, booze, drugs? I even ask myself what would Jesus do?, but by then I've past him or her and its too late. We need to stop talking and asking questions and just do what Jesus did and do what Jesus said. He gave to the poor, no questions asked not because of who they were or what they would do with what he gave them but because of who HE is. We have to remind ourselves that we are his hands and feet. Next time you see a homeless person say hello give them some money and treat them like a human being, this is what Jesus did and what he says to do. This is compassion. Don't think about where your money is going, but remember the One who gave it to you in the first place and He gave it to you so you would have the honor of sharing it with someone else He loves. God bless

What I struggle with, is not just the "what if they moved in next door" question..

.. but what if God told me to give everything I have to help them.

My security, my money... what if I had none of that any more? Sacrified to help the homeless or the poor, or whatever?

Do I trust God? What if it wasn't God who spoke to me? Would God really ask me to give up all I have? What about my own family? How would I provide for them, without anything of my own?

Thankfully I haven't been "tested" yet, but if/when it happens I pray for strength. For me, it's a trust issue -- 100%. Do I trust God and God alone to provide for my needs and my family? If so, then I should have no problem recognizing that none of "my" stuff is mine at all, and I should have no trouble giving it away to whomever needs it whenever they need it.