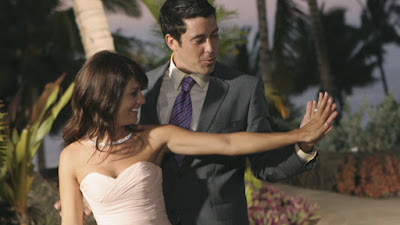 OK ... sooooo - ask me if I did the "happy dance" on Monday night, and I'd have to give you a big thumbs up to that! Of course, in my 35wk preggo body, it was more of a couch-bobbing-up-and-down dance than a full-on-happy-dance ... but you get the idea.
My hubby and I made ourselves comfy on the couch - and the entire time he kept saying, "She chose Kip. You know that, right? Be prepared." But he always does that ... tries to downplay what he's hoping for, in case of disappointment. You should hear him during hockey season when he's desperate for his team to win ...
Truth is, is that all three guys - yes, I'm including the surprising-popping-up-before-a-proposal Reid - were all pretty great guys. I mean, from what we were allowed to see. When Kip was sent home, and then Reid was as well - we laughed outLOUD with Jill's comment, "You'd better be worth it, Ed." Ok - so they had to bleep out a word and perhaps not the classiest of things to say before a proposal, but I think she had gone through a massive amount of emotions, and was READY for her man. And as Ed walked down, my hubby and I high-fived each other and cheered our guy on.

I was pretty impressed with his whole, "before I go any further I need to know that you love me too." Well, dude, way to show all the other guys how it's DONE. None of this going down on one knee and be rejected ... smart smart smart.

Fast forward to the "After the Final Rose" show. Hmmm ... felt bad for Kiptyn. Such a nice guy. And then Reid ... wow - he was obviously still smitton, no??
And I like what she said in response to his "would things have been different if ..." comment. Her answer being that she was happy with who she chose, and she fell in love with Ed. Reid couldn't have changed that. *clap clap clap* Good answer, Jill, good answer.

When Ed came out, it was so OBVIOUS that they were crazy-mad about each other. And a wedding planned within the next 12 months??? Oooo - I hope that one gets a tv special *grin*. I'm cheering them on!

So - another season over, and I think this one was my favourite. Not only because Jill was Canadian, but because the last few guys seemed like such good choices.