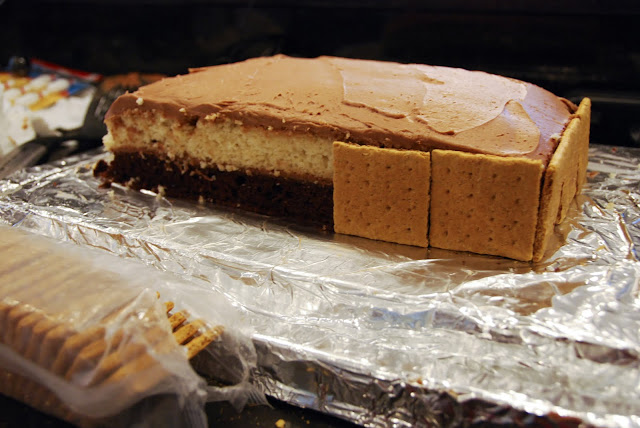 
You know, I had high hopes for this cake ... but the drama that followed along the preparing of this cake made me "just want to get it done".
I baked a 9x13 of chocolate cake and a 9x13 of vanilla cake. I used butter frosting to coat the chocolate cake (using melted chocolate, rather than cocoa, to create the flavour). But when it was time to flip the vanilla cake onto the chocolate cake, I had 2 screaming children - both climbing up on the counter demanding to see what I was doing, dinner beeping from the oven, and a husband walking in the door asking what all the commotion was about.
So, the vanilla cake broke into a good dozen or so pieces as it crumbled over the layer of frosting. UGH.
Because of this, and because there was NO WAY I was starting over *hormones make me a wee bit impatiant ...* I simply put the cake back together and did my best to frost the living daylights out of it.
Then came the decorating ...
but by the time I actually started, it was close to 10pm - and I had NO desire to be a stickler for details. I wanted to go to bed, and wished the cake would just decorate itself.
This is what I came up with ... and I was terribly disappointed in myself. But the next morning, Mattias asked to see it and he gave me a big hug and said, "Mommy - it's the most beautiful cake in the world." 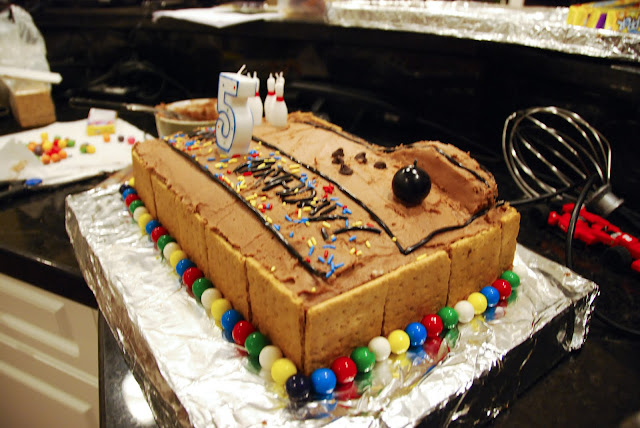 What a great kid *smile*.