The weather is lovely, our home is pretty much done with the renos (except for the carpet man not bringing enough carpet to do the stairs going to the basement ... UGH. Wish he would've known that BEFORE he ripped out the old carpet, leaving exposed nails etc ... ah well - soon, right?).

But I don't have a lot of energy to do all the things I would like to with my boys. I'm feeling guilty for not jumping on the trampoline with them, going for bikerides, playing street hockey (oh, come ON BABY - get out of me!!). But both boys do love crafts and THAT I can do.

Tias is into creating "mini golf course" drawings and "bowling lanes". He uses up a good trees-worth of paper in an hour ... But yesterday we made the "memory game" and it was a HUGE hit with Tias. 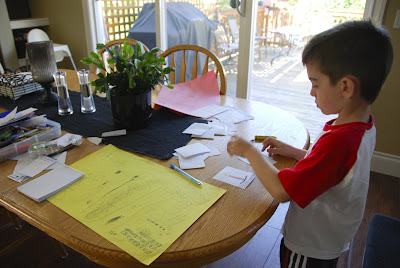 I cut up equal size squares of paper, and we took turns drawing 2 similar objects on two different pieces of paper. We did a campfire, a smiley face, a candle, a caterpillar ... you get the idea. 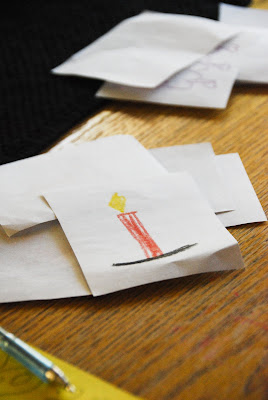 Maybe today we'll make more - to make it a bit trickier *wink*. Or bake cookies. Mmmmmm. COOKIES. That sounds better to me :-)

What a great idea! I may try that with my little guys!

I have some super exciting news for you. Do you wanna know ? Well, do you ?
Stay tuned for an upcoming book release (collaborated effort) ! wahoooOOoo!