Ok ... here's the next reveal!!
Remember what this room looked like before?? No? Well, that's probably because I was HORRIFIED at what the room had turned into and didn't post any pics ... I affectionately called it "Tijuana" - you know, the place where all the junk ends up? Yup. That was THAT room. It was SUPPOSED to be my craft room - and it served it's purpose over the past 4 years. Then, it became the room my hubby would sleep in when he came home from hockey at 3am and didn't want to wake me. But by the time the renovations began, this room became the place where we just opened the door and chucked things in - hoping to deal with them later. UGH!!
Here are a few pics of what we had to deal with (how embarrassing!!): 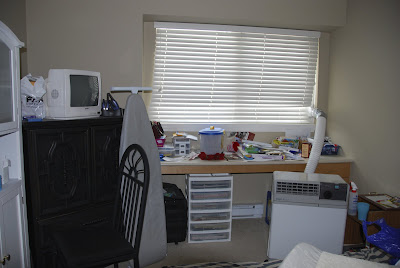 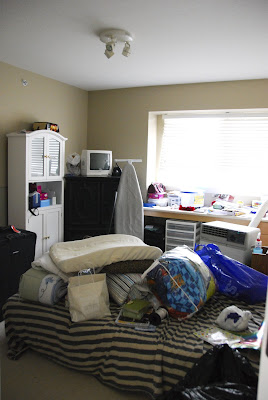 Then, with the news of a new wee one coming, we decided to move Josiah from the nursery, to this room. That way, he could have his "big boy" room - and we didn't have to do a thing for the baby.

My hubby always wanted to give our boy a "Cars" bed, and Siah LOVES Cars ... so we got one that was a shell around a twin bed - that way he could grow out of it, and just need a headboard when done.

Some things we did: I chose two colours from the Cars duvet, a green and a blue. I also chose red curtains for some punch. Our brother-in-law, PDG, made the shelves that can hold different nicknacks as Josiah grows (photos, awards, model trains ... whatever ...). And I hung up 2 magnet boards that Siah can display his own artwork on. I had bought "circle" mirrors - unaware that they were not connected (oops). So, instead, I attached them to the sides of his furniture - didn't want them on the wall where they could do some serious damage when removed. All the furniture (other than the bed) was bought at IKEA for SUPER cheap. And the toy storage is a bit too small - but it'll do for now. One of my favourite things is the "triangle" clothes hamper that fits so neatly against the dresser. I got that at Jysk. One thing I had HOPED for, was to find "road stickers" that I could put on the green wall (the right hand wall). I imagined having a winding road ... but haven't found anything substantial enough. 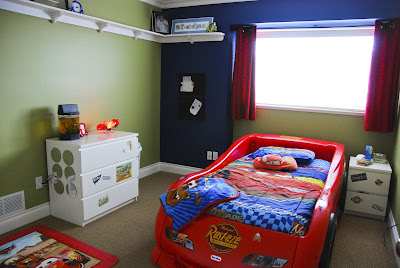 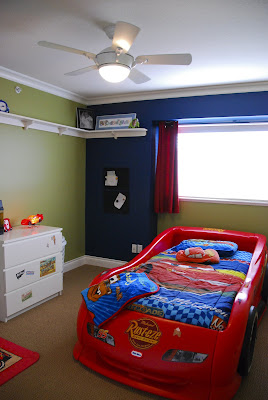 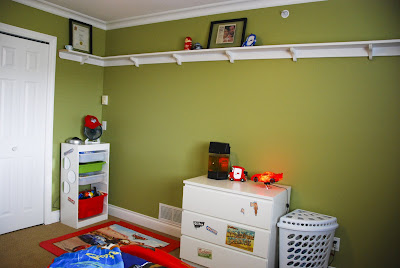 So? What do you think? Any other ideas? I had thought about putting "zoom" and other car words on the wall ... but I don't want to paint anything on my freshly painted walls ... maybe I could find some stickers ...

Well - I had a LOT of fun doing this room ... and am already getting a teensy bit excited to do Katia's room in a couple of years ... I wonder what she'll want to have??

Looks awesome!
For "writing" words on a wall, check out this website:
http://www.wordtothewall.com/
I've seen it done and it looks great! I think I'm going to order a saying for our nursery :)

How much fun is that?!?! I love the movie Cars and when I read that you were creating a room out of it, I couldn't wait to see the finished product. It looks awesome!

Fabulous job and a great use of color - which I think is so fun in kid's rooms.
I LOVE the high shelf around the room - such a great idea and good use of space.

The room is totally awesome. We do girl rooms so mostly pink and princesses.

Maybe you could look for an old street sign on eBay? You could find something cool.