I've been pretty much every hairstyle you can imagine.  I've been cursed/blessed with poker straight hair, that I completely fought against since the age of 12.  Yes - the dreaded perm was a common expense for me during those painfully icky years ...
When I was in grade 11/12, I desperately wanted long hair. I wanted it all one length.  I wanted a spiral perm.  I wanted it long and flowy ... but the growing out process from a really bad layered haircut proved to be too much.  By the time spring of my graduating year came around, I completely abandoned ship with a small bribe from my mom to get rid of it.  So, I cut it off and proceeded to look like I had stuck my finger in a light socket.
Attractive.  I know.  ... my prom photo (with my "cropped" date). 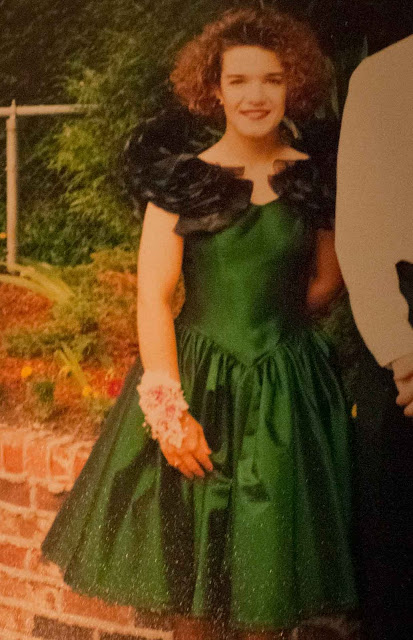 After highschool, my boyfriend at the time told me that he'd dump me if I ever cut off my hair.  So.  I pixied it and dyed it black.   Needless-to-say, that relationship ended not long after.  But I'm annoyed because I can't find any initial photos of when I did that ... this pic was taken about a month later during my travels in NZ with my friend.  My hair grows about 1 inch per month.  You can imagine how short it really was ... I was 19. 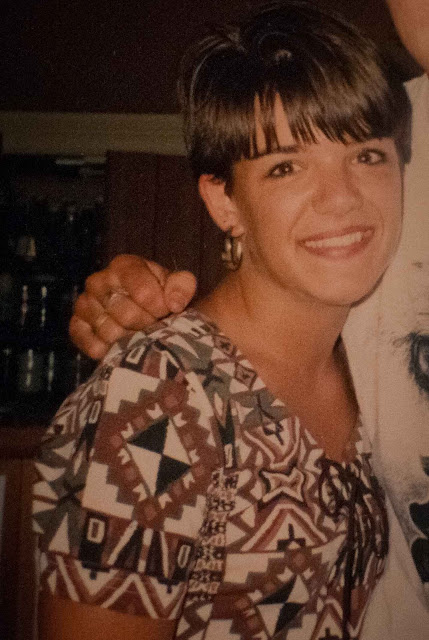 After that, I began to grow it back.  And I was pretty much a share-holder in every dark-brown-with-burgandy-highlights hair colour product.  Colouring my hair was a monthly ritual ... and for the first time ever - my hair was straight. 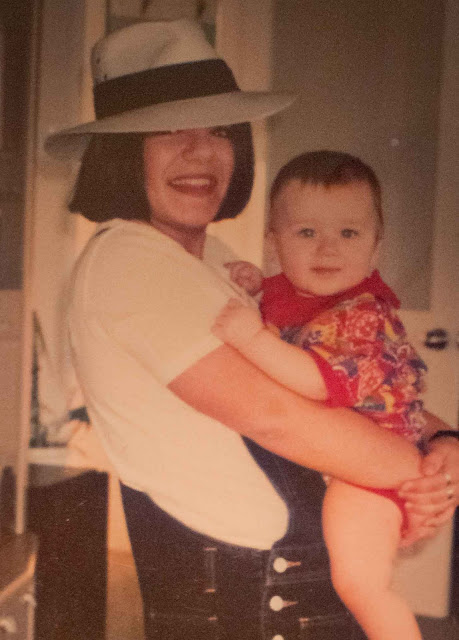 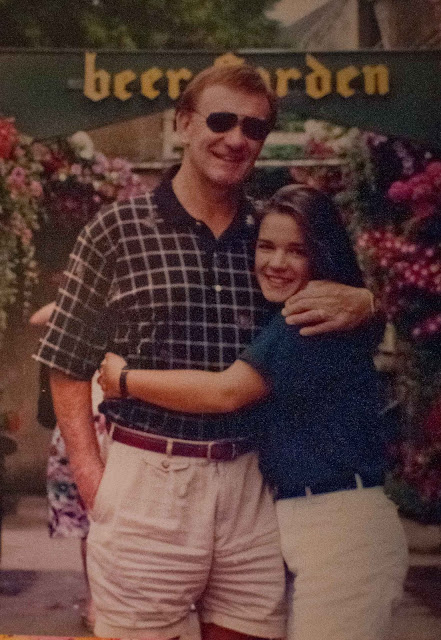 Then.  It just kept growing.  I had never had long hair, never mind long STRAIGHT hair, before.  It was all one length ... and I was also sporting the thickest eyebrows ever, I see ... this pic was from a Mexico missions trip I went on.  There was a "long dress" dress code - in case you were wondering. 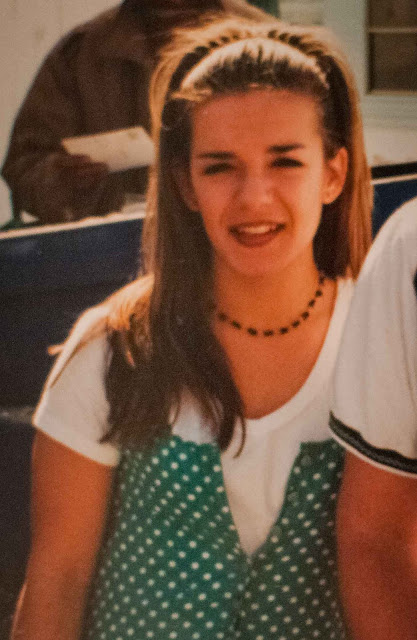 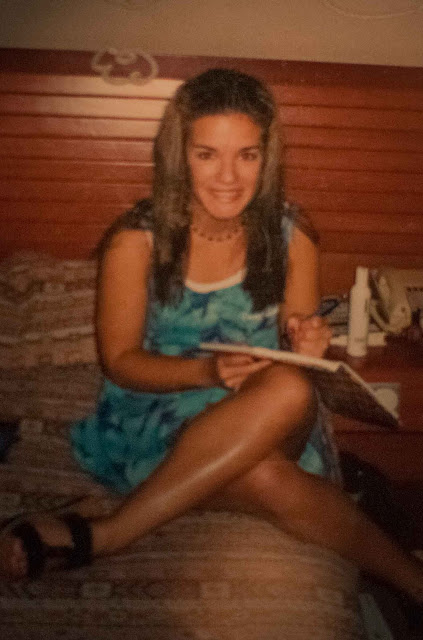 Then came the blond ... it started off as streaks and before I knew it - my whole head was pretty much blond.  And I also invested in hot rollers - to try and imitate all those lovely, ringletted friends I had ... Feeble attempt, I know.  The curls lasted for about an hour before they turned into a straggly mess ...
I wore it up, down, straight, curly ... braids, crimped, low ponys, high ponys.  You name it, I tried it.
This was all around the time I met my hubby and got married (these pics are from the summer before I got engaged in February ...).  I was 23. 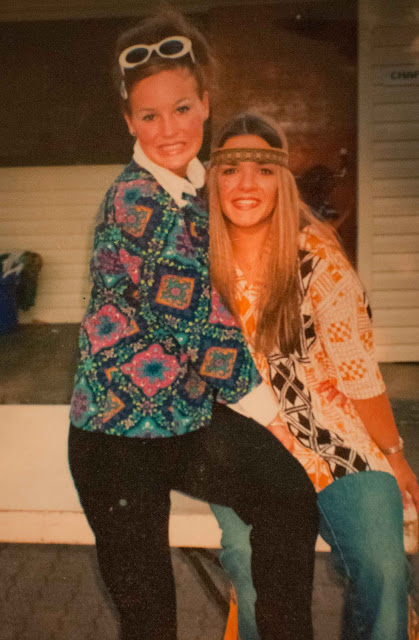 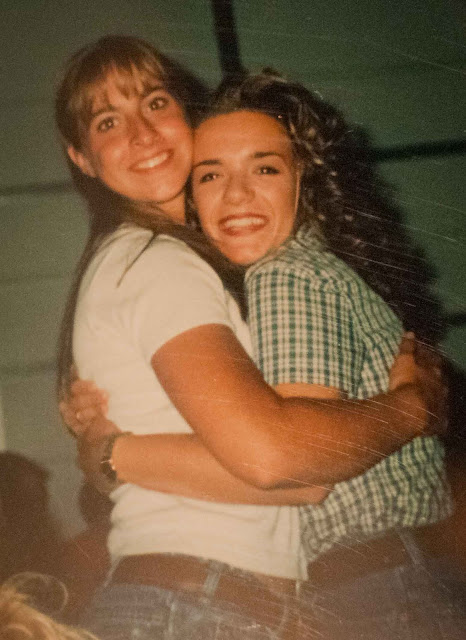 This photo I found (please excuse the quality ... eek) was taken in Fiji, five years after I got married (I was 29) ... I had just found out I was pregnant with our first child, Mattias, the week prior.  And after that ... that blond was gone. 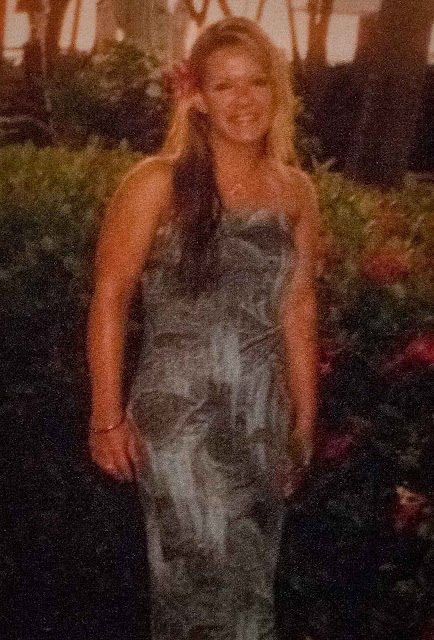 This photo was taken when I was 8months preggo with Josiah.  About a year earlier, I had cut some bangs - which I hadn't had since I buzzed it - and I had a lovely reunion with the bottle of dark hair-dye. 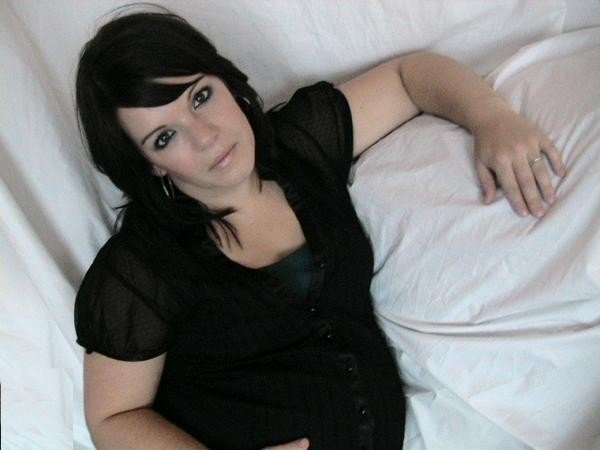 After that, it's been a mix-mash of basically the same style.  Long bangs, side part, layered bob.  Currently, it's blonder in the front, and about an inch off of my shoulders.  And I am BORED with it.  It's been the same for so long ... This pic was taken last week.  I'm thirty *cough* seven. 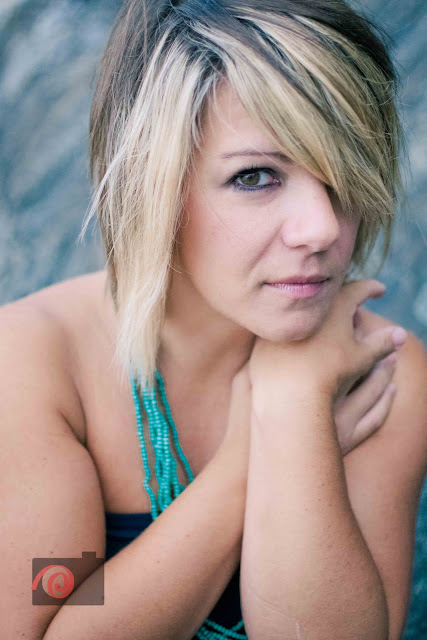 SO.  Last week I bought a 2011 hairstyle magazine, and I snapped a few of my faves with my IPhone.   Here are a few that jumped out at me.
FIrst off - the fauxhawk.  I LOVE this.  I think it's beautiful.  Ok - maybe this one is a little bit high, but it's funky and feminine, edgy and bold.  And my hubby rolled his eyes when I showed it to him and said, "yuck".  So - I guess that one's out.  Dang. 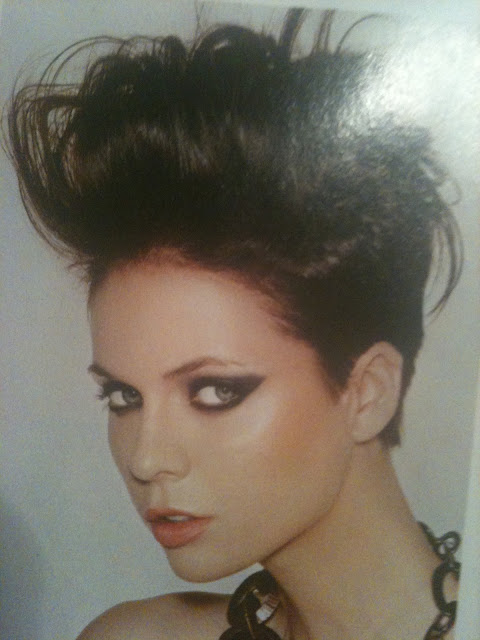 I love this in platinum blond ... isn't she beautiful?  But again, my hubby is not a fan.  Boo. 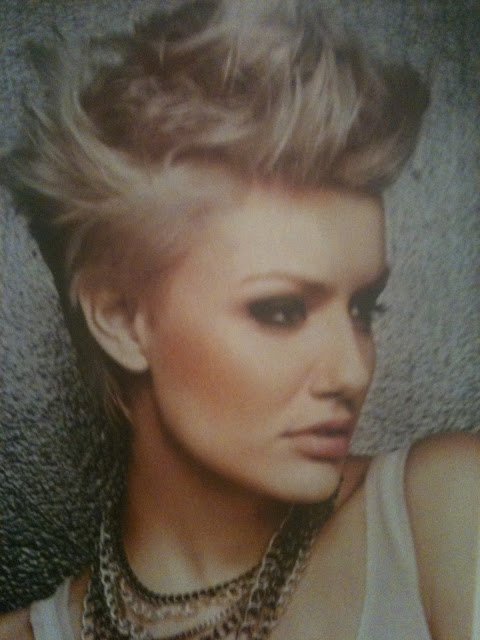 So - there's this one.  But it's just a shorter version of what I have, no?  And I think she has an undercut  on the one side - which is exactly what my hubby doesn't like.  I may have try and win him over - I'm loving undercuts (not shaved, just short). 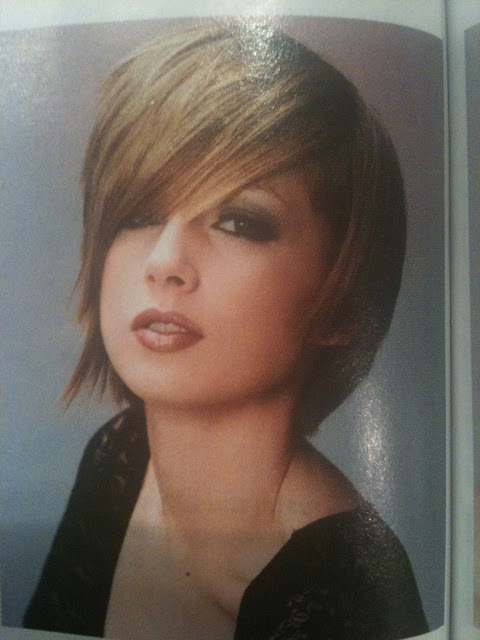 So, the winner?  Well, this is the pic I'm planning on taking to my hairstylist in a few weeks.  I'm not sure if I just like the hairstyle, or I just wish I looked like her *grin*.  That's the thing ... you can like a hairstyle on a model, but it may look like trash on you.  She has very fine features ... I, do not.
But I love this ... and it means that I'll be "growing it out" a bit.  Shorter on one side, "airy" and edgy on the other.  I like that.  And will I keep the blond if I do this?  Well ... It'll take me a while to get it like this ... maybe in the fall I'll go dark again.  Maybe with blond, the way this model has done the red?  I don't think I'd do red ... it'd clash with my wardrobe.
And my hubby?  He gave the, "yeah whatever" smile and nod when I showed him it.  Which is better than the eye-roll *grin*.  Pretty much a thumbs-up. 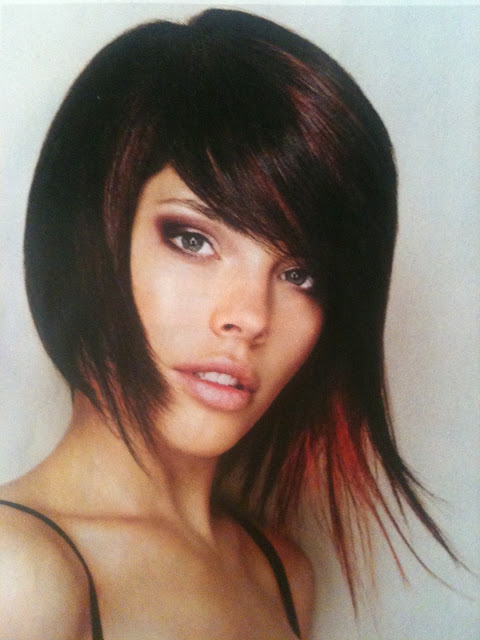 You've always had great hair; except maybe the perm stage, but still in it's day it was HOT!!

LOVE this post...and so pleased to know I'm not the only one to obsess over changing my hairstyle when it gets too old and boring. I've had my current one almost 8 months and it's far too long. I spend ages on google images saving the ones I like! Love the new one you have chosen and can't wait to see how it looks :)

Love how brave you are with your hairstyles now...the edgier stuff looks so great on you and I think this new look will be awesome, too!