If you're not from Vancouver ... this post will probably mean nothing to you.

If you're not a long-time-Canuck fan ... this post will probably mean nothing to you.

So ... I was in Yaletown, a trendy part of downtown Vancouver, waiting for a client to show up for a photography shoot.  I was standing alone ... no one in sight ... and then I noticed two well-dressed men laughing and talking.  They were coming towards me, but the sidewalk was being redone, so they were on the street.

They stopped and I thought to myself, "man, those look like hockey players."

Well dressed, they shook hands then parted ways.  He turned around.  He was still a good ways away, but my heart jumped just a wee bit.

It was #16.  It was Trevor Linden (if you're a die-hard Linden fan like me, you'll love THIS ARTICLE I found on him).

I had all my photography equipment ... but quickly opted for my iphone.

He kept walking towards me, no one else around, and smiled.

He put his arm around me, got down close as I stretched out my arm to capture this: 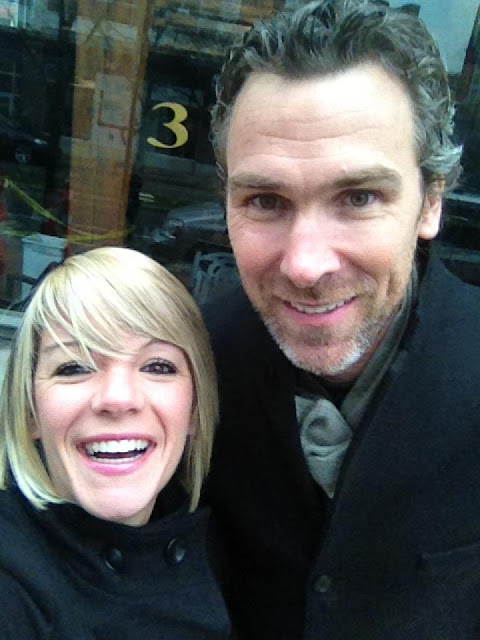 I assure you ... my ridiculous grin was authentic.

And he was wearing cashmere.

And he smelt good.

The photo was over, and he started walking backwards - saying "have a good one", and I just about kicked myself for not coming up with something intelligent to say.

Ah well ... at least I was brave enough to capture the moment.  And now I can cross off #87 on my bucket-list *grin*.

And what was the VERY first thing I did?  Why, I sent the epic photo to my hubby of course, who immediately responded, "where are you?  is that Trevor Linden??"

WOW! I am not a huge hockey fan but growing up in the Lower Mainland how can I not be WOWED by this! TREVOR LINDEN! Super cool!
(cashmere & smelling good too - sigh!)