"Spongebob Square Pants," Josiah answered when I asked him what kind of cake he wanted.

Off to my computer I went ... and a whole whack-load of Spongebob masterpieces came up.  Now to just pick one as a starting point.

I baked two rounds ... I decided Spongebob would sit on them.  That was easy enough.  Buttercream frosting, dyed blue, for the water ... 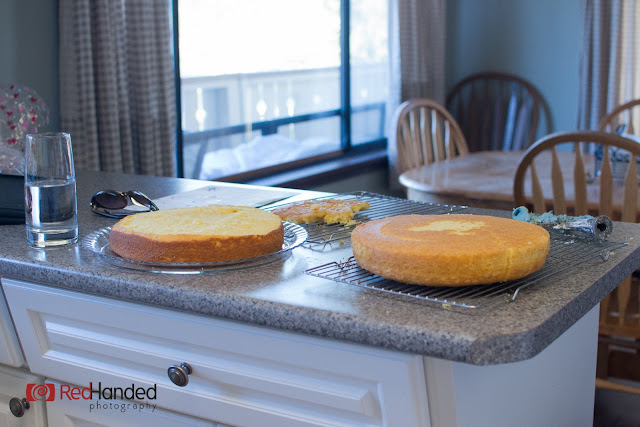 Then, after some seriously great advice from the lady at the cake-decorating-store, I made a rice krispies square.  Well.  Rectangle, that I cut up ... and munched on a little. 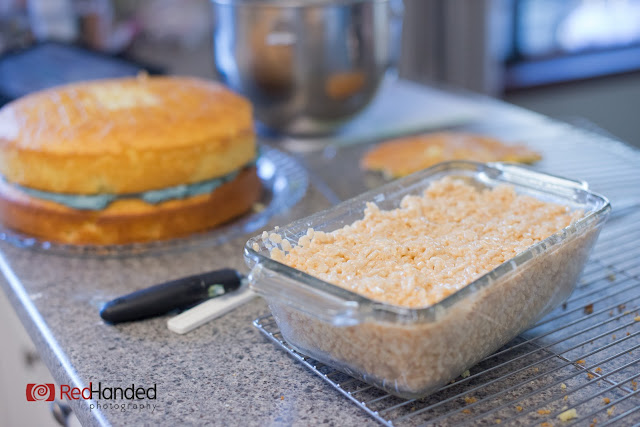 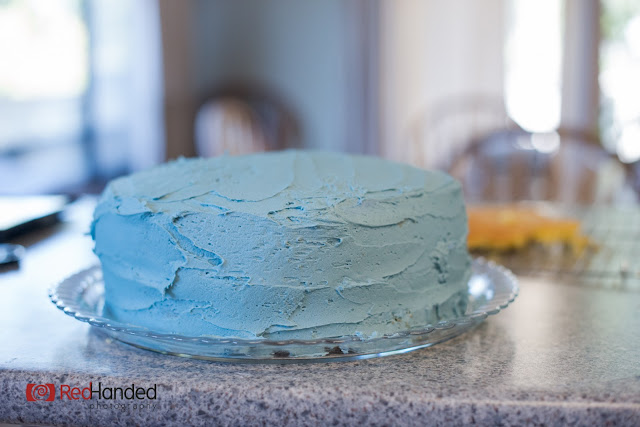 I am useless at making fondant ... so I buy it at the cake-decorating store.  So worth the money, as far as I'm concerned.  Tore off a hunk of white-stuff and coloured it yellow ... rolled it out and wrapped it over the rice krispie square.  And then I stared blankly at it for a good 10 minutes. 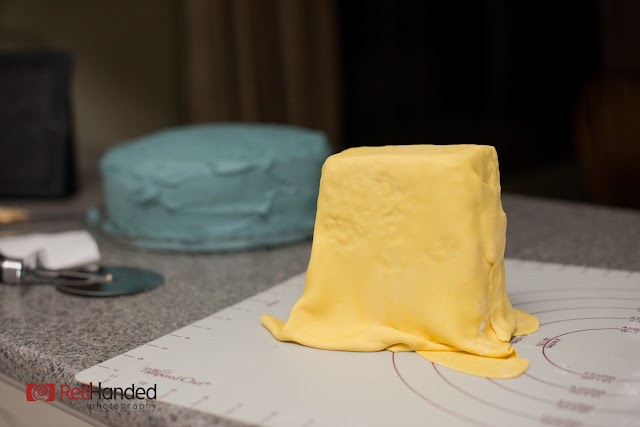 Out came another google picture ... and I tore off some more fondant, dyed it brown - rolled it - made the pants.  Same with the white belt ... 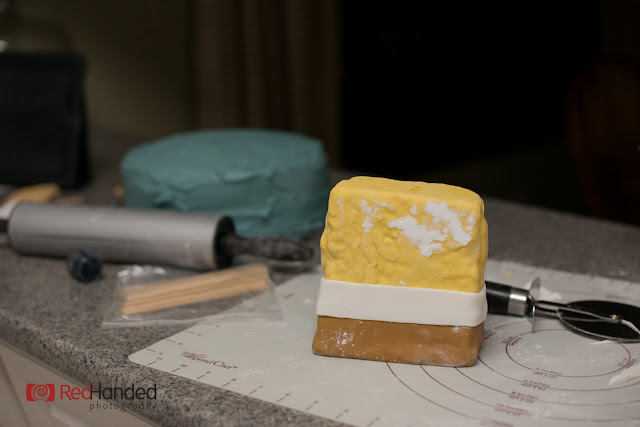 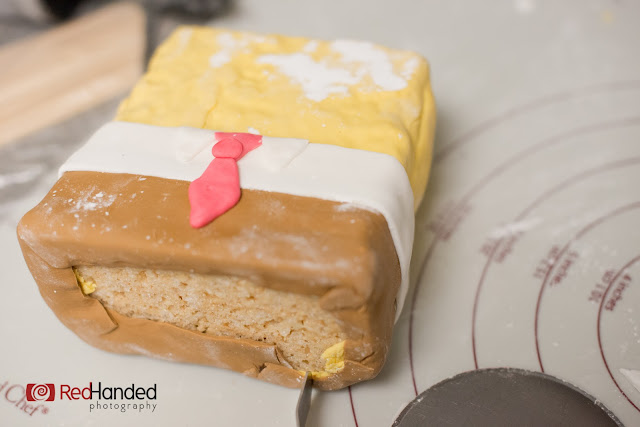 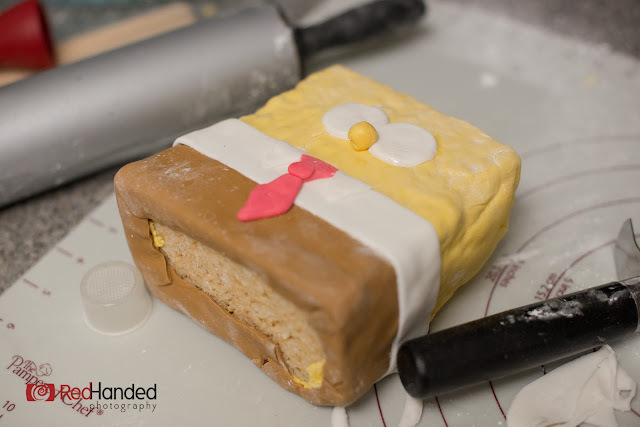 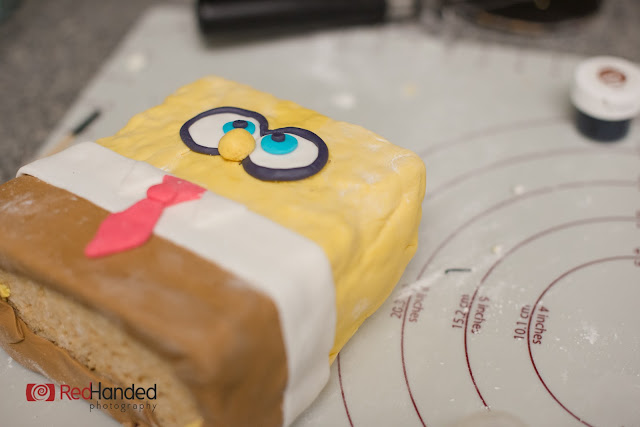 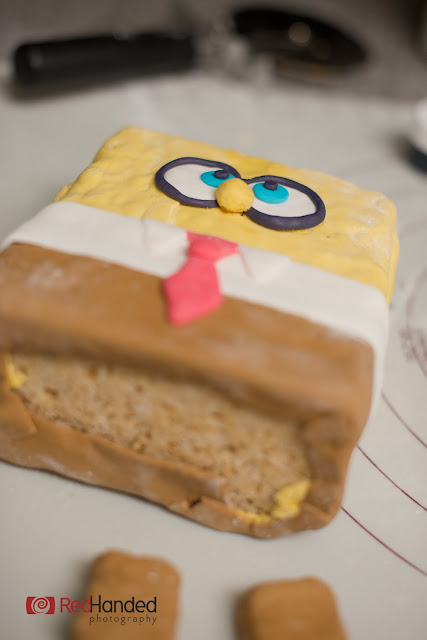 Stuck some skewers through the bottom, and pierced them into the cake.  Done. 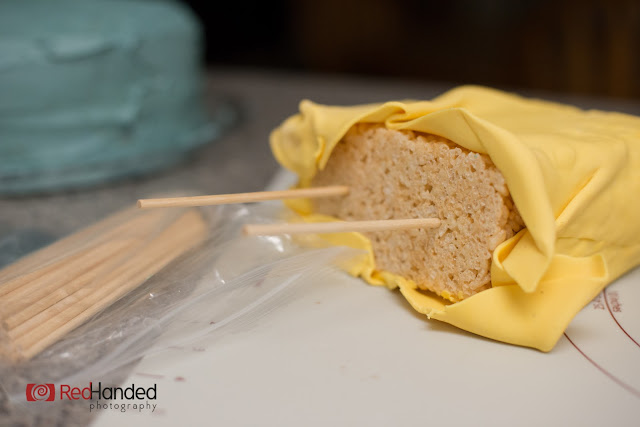 I rolled some yellow arms and legs ... the pants were left over rice krispie squares with the brown fondant.  The socks were white ... the shirt sleeves, little white squares ... little black shoes ...

With a cake-gel pen (you know, like the cake "scribblers") ... in black ... outlined, and eye lashes - super messy because I did it when he was sitting so it dribbled a bit.  Again ... I am a framer - not a finishers (construction lingo) ... in other words, I can build a cake, but the quality of the details and finishing are far from perfect ... but who cares *laughing* ... Red and blue gel for the tube socks. 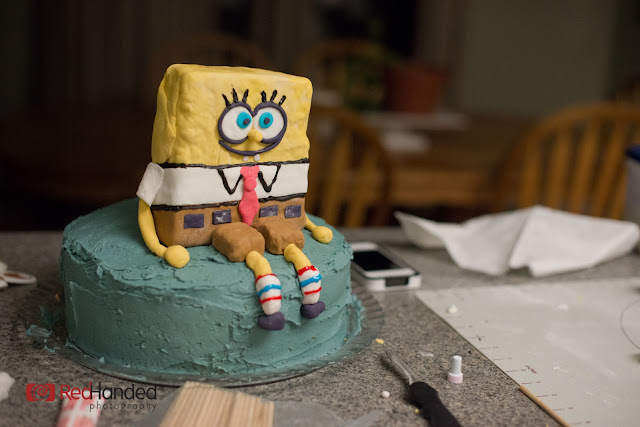 I was up to this point at 1am and was TIRED.  I figured I'd finish it in the morning, so after the "reveal" (scroll down to see Josiah's little face when he saw this ...) ... I did some more finishing.  Some fat green "rolls" for seaweed (took about 20 seconds, literally) ... and fiddled with some silver and red candy balls that I had left over from a cake about, oh I don't know, two years ago *grin* ... 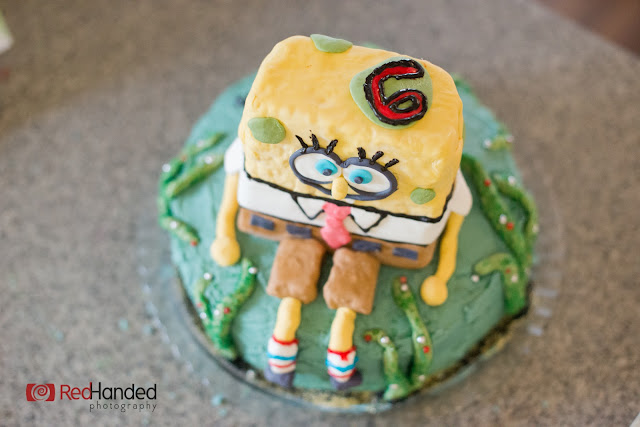 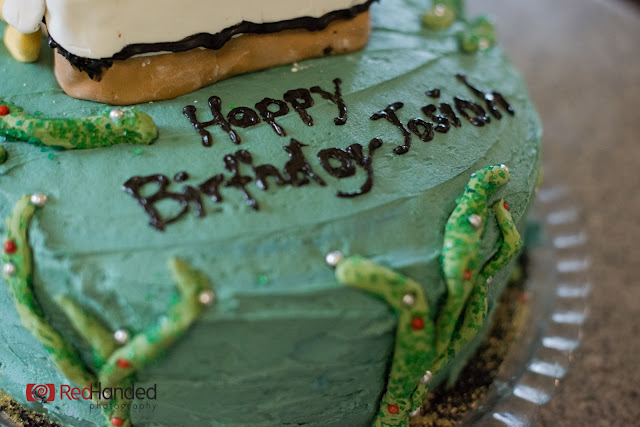 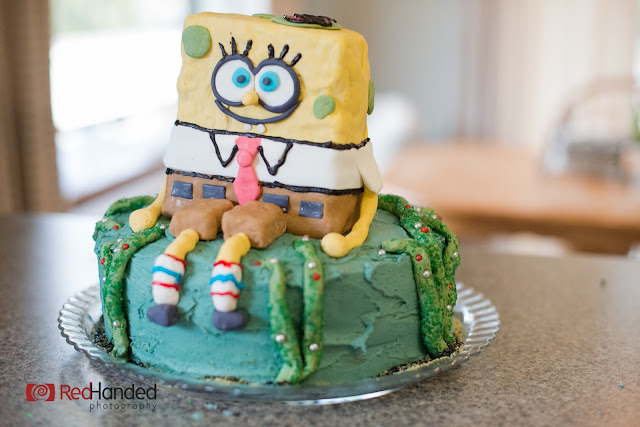 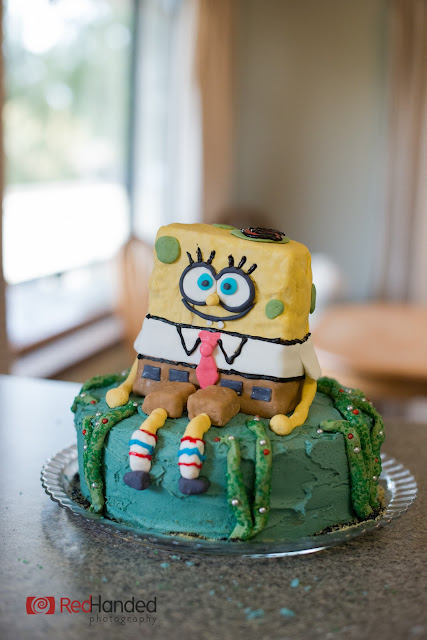 So, the tradition is - a big reveal.  The morning of their party, the kids wait to see their cake - which is usually hiding under a tea towel. 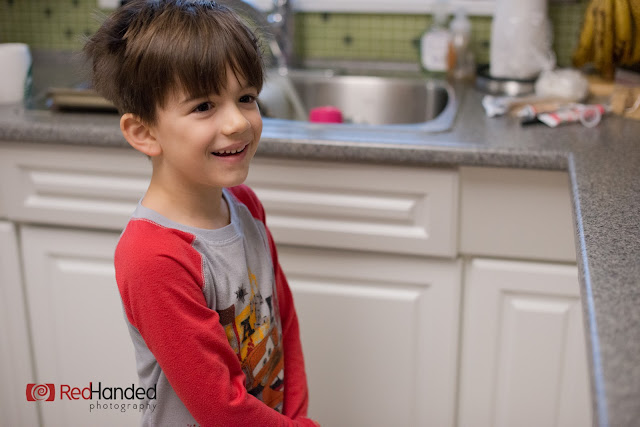 It wasn't completely finished at this point ... but he didn't care. 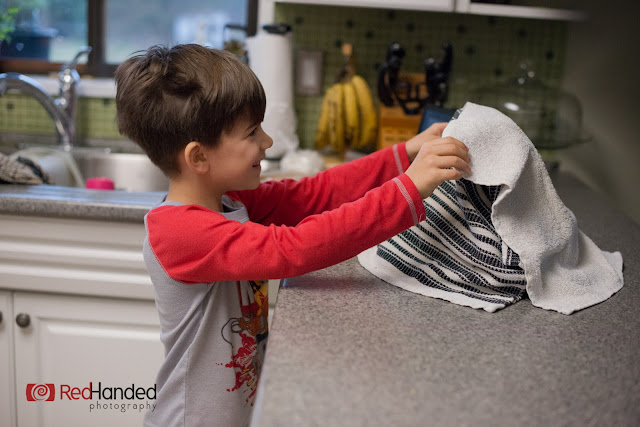 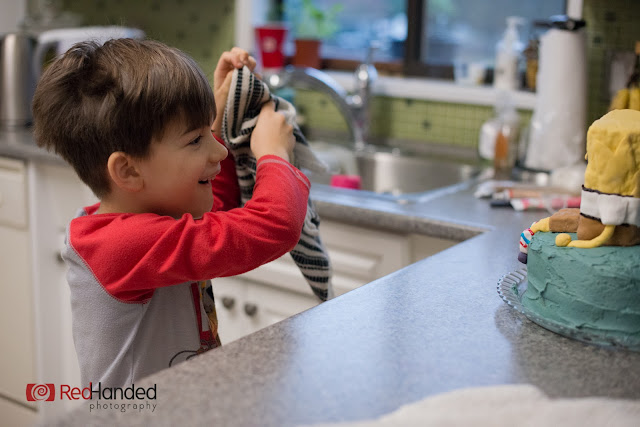 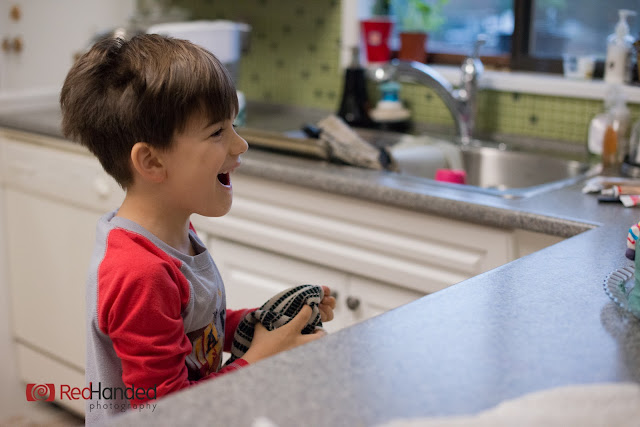 Honestly - THIS is why I do it.  The frustration, the hours it takes ... that look will only happen for a few short years.  I will do it as long as the kids ask for a personal cake ... a little family tradition that I hope they remember when they're old and grey.  My love language to them, for sure. 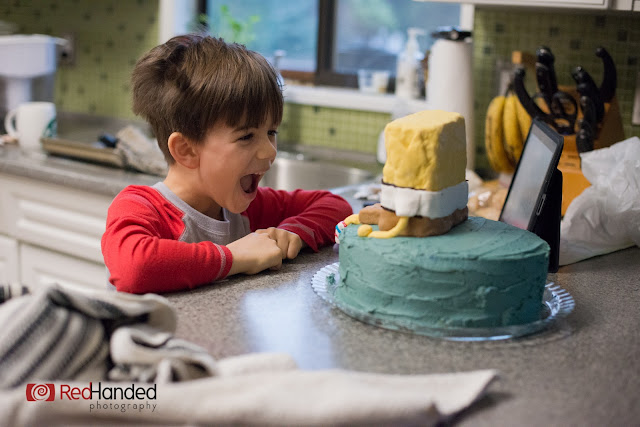 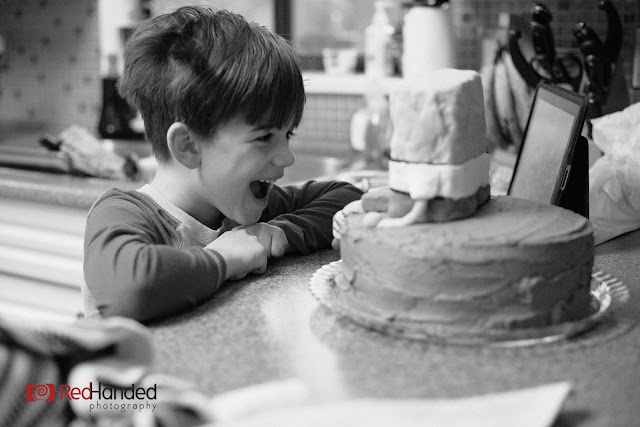 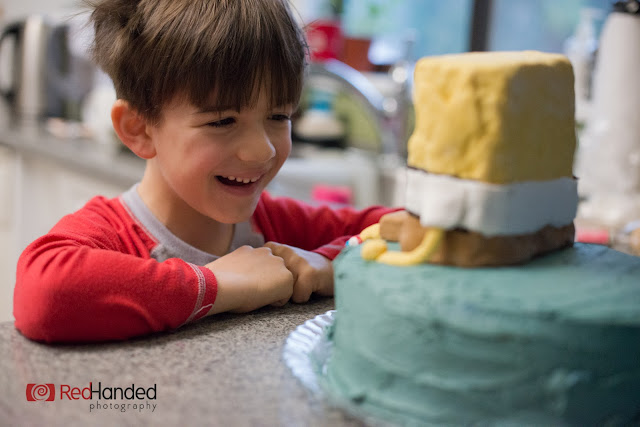 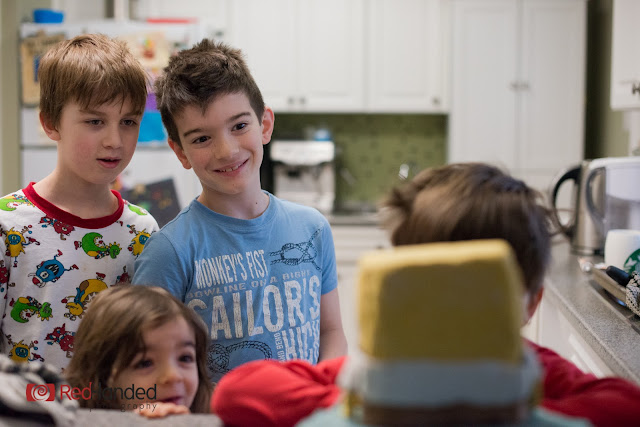 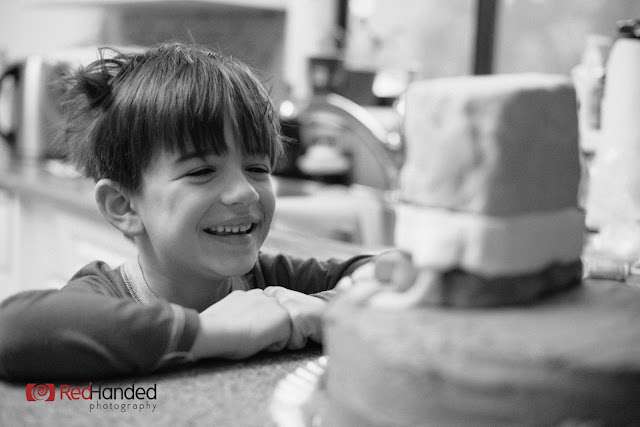 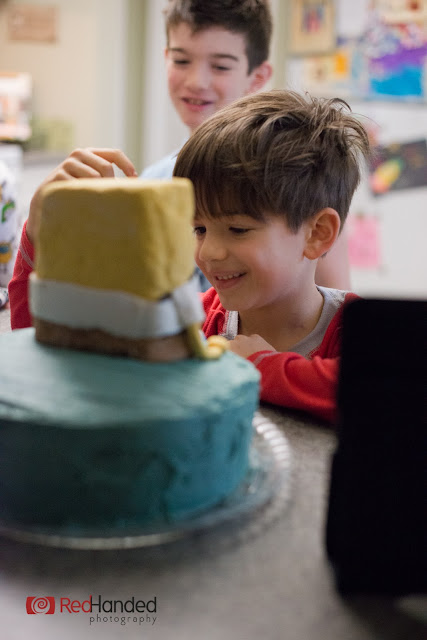 Pretty safe to say, he loved it. 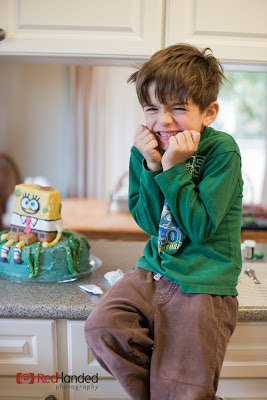 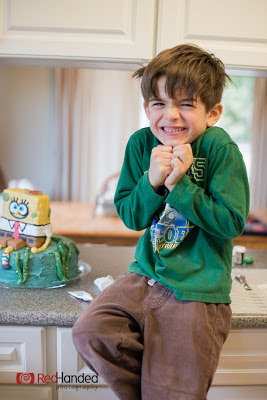 And with it all finished ... Josiah's six year old birthday cake. 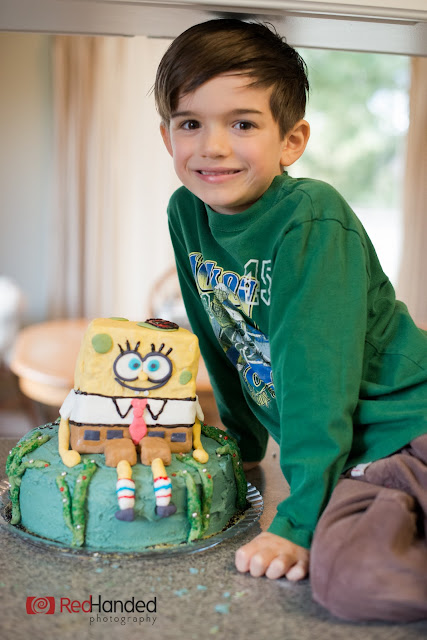 Now I don't have to fret about another one until August ... Mattias is already talking about what he wants.  I should start planning now, to help relieve the pressure.

Email ThisBlogThis!Share to TwitterShare to FacebookShare to Pinterest
Labels: [cakes]

Oh man, this is the BEST! I love that you do this for your kids (I hope to be a super mom, too) and I LOVE LOVE LOVE his reaction - the BEST!!!!!