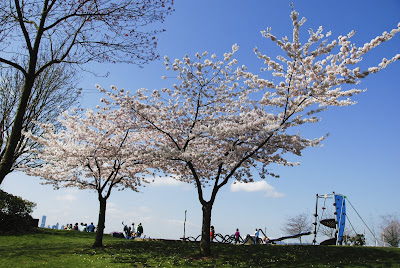 I had a couple of different ideas for my post today - but felt that maybe I should share something that has been a reoccurring theme for myself as of late.

Today I had an orthodontist appointment - but I was early and so I thought that I would maybe pick up some groceries beforehand. But as I drove, I felt strongly that I was to go visit a friend who's really been going through it. Her and her new husband have had some difficult times with real estate (purchasing a new property, then the deal for their current property fell through), the swine flu cancelled her honeymoon plans (literally), and she is now facing her father being tested for Parkinson's.

When I was in New Zealand, I had the privilege of being "roomies" with one of my parent's dear friends. Her husband succumbed to a melanoma (skin cancer) in his early sixties - and she has much wisdom on the whole "comparison" topic. A small mole has changed her life.

It's easy to say that someone else's situation is better or worse than our own. Someone who has been through a difficult time may look at another circumstance and say, "I could never walk through that," while the other person walking that particular journey feels the same way about the other person. Or maybe someone feels like they've endured the worst of the worst, and that no one could possibly understand how defeated they feel.

My "roomie" said to me that she's learned to not look at others and compare their story to her own. Her husband passed in his early sixties ... and it would be easy for her to look at someone ill in his 80's and say, " ... at least he had another 20 years." Where as someone could look at her story and say, " ... he lived until his sixties ... my husband was taken from me in his 40's, " or " ... at least she had a husband, I've never found love ...". Her pain and loss is very real, regardless of how fair or unfair it may seem to others.

Each of our stories is worthy of our feelings. We all mourn parts of our journeys and rejoice in others. For some, their hard road appears to last only a moment - while others seem to walk an endless journey of hardship. But not one is more valid than another ... each of our circumstances is different - and how we were brought up, our faith in God, our surrounding support, even our own personalities all play a role in our perspective.

I think the greatest thing that we can do, is support and encourage those we know when they are facing hard times, and not try and weigh their experiences against our own. Validate them, believe in them, stand beside them. For it is the person who has walked the hard road who learns compassion for others ... and will most likely stand beside you when you need it most.
Posted by Tawn at 1:13 PM

Amen to that, Tawn! This subject is dear to my heart. It is so easy to be tempted to compare ourselves with others, and therefore invalidate someone's (or our own) feelings just because one set of problems seem less in comparison with others. Our feelings are valid & need to be respected! God created us with feelings, and no one can tell you how to feel. I'm sure you're familiar with the passage in Galations 6:4 which tells us not to compare ourselves with others. If we start doing that then we can be caught up for eternity trying to figure things out instead of just living lives free in Him! And doesn't the enemy just want us to get sidetracked with dumb stuff like that so that we miss the great stuff God is doing right now? Thanks for this post. Good stuff.