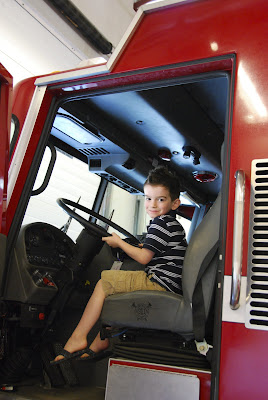 Tias' preschool went to the Firehall for a fieldtrip and it was full of great information, laughter from the kids, and an eye-opener for us parents. 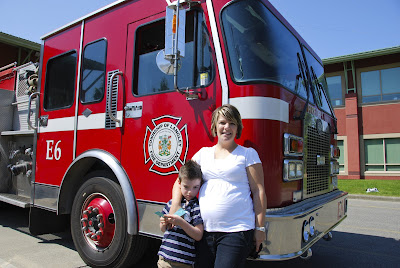 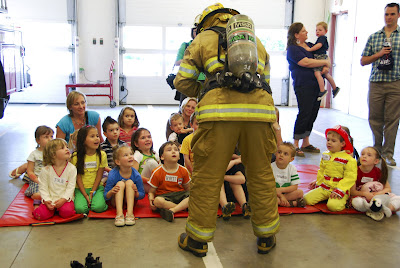 The firemen were so great with the kids. There were games, reenactments, drills and even a chance to sit in the firetrucks. 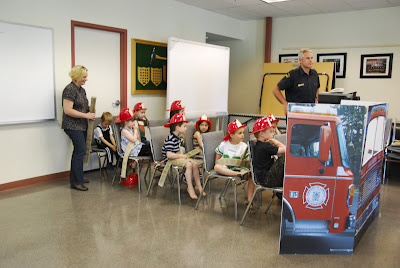 The eye-opener was the film that was shown to the parents in a separate room, while the kids had their snacks and made crafts. The film was actually an episode of Dateline, showing the importance of fire safety and even more important, the power of having your family prepared.
I found it fascinating that it was SMOKE that kills, not the actual flames. And a story of a family where 2 small children succumbed to smoke inhalation really hit the message home. There was also a segment where 10 year old children, who felt very prepared because of school firedrills, were put to the test. But when faced with a homedrill during the night, none of the children were able to save themselves. One 10 year old simply covered his head with his blankets and whimpered, "I'm scared." 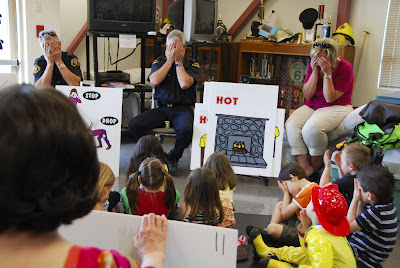 Of course, many of us parents felt the strangulation of panic as we realized that our two story homes had no safe way of evacuation. And when we thought of the ages of our children (mine being 2 & 4, plus a newborn soon enough ...), it became apparent that we were NOT prepared.

I'd like to say that we have a plan now, but we don't quite yet. Today, though, I will be calling the sprinkler service to fix our system as we had a pipe blow a year and a half a go, and we turned the water off. How ignorant of us. It'll cost some money that we hadn't planned for, but I never realized how blessed we were to have a sprinkler system and how it could, potentially, save us all.
And once my hubby's leg is better (2 more weeks, fingers crossed!!) we will be going through the drill ... having a planned meeting location, talking about keeping your door CLOSED (big tip for keeping the smoke out), staying low to the floor, opening your window, yelling for help ... we'll be doing it all.
So let this be your reminder ... do you have a plan? What would you do? Do you know? It's something that I pray you'll never have to put into action - but being prepared is the best life saving plan you can have.
Posted by Tawn at 9:37 PM

You can buy roll-away ladders to install in your second storey bedroom. Also note that one of the big issues for kids in a fire situation is being very afraid of (and hiding from) the scary monster with the weird face (firesuit and head gear...think of how smoke and fire flicker would distort that!). I've seen lots of great kids picture books that have photos of firefighters fully suited up... at least gives kids an idea of what "help" might look like in an emergency! For my anxious kid it always helps for her to know that police/fire/paramedic/nurses are Moms and Dads, too. Makes the person more "real" and less mysterious/scary.

Thanks for the reminder Tawn! This was my fAVOURITE fieldtrip when I was teaching ... it is soooo true and now that I'm a parent *points and shakes fingers at myself* I need to get on the ball ...
And AMEN to the scary monster with the weird face. When I was teaching they put me in the whole get up, trying to get the message across that the person in the get-up is a helper/friend. But then if it was to ever happen, we can only pray that all the preparation pays off! Thanks Tawn!