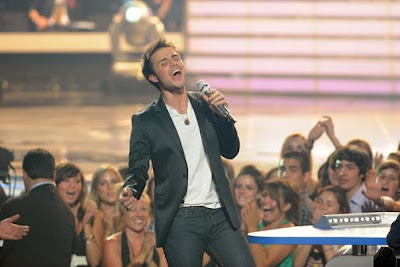 Oh the drama.
Did you watch? I sure did ... even watched most of the show, despite having the PVR ability to skip through everything ...
A couple things made us laugh outloud ... like the Bikini Girl (there will be no link to that as she makes my stomach turn *smile*) and her version of "Vision of Love". And the crazy Tatiana - whom we're still debating whether she really did rebel against the bouncers and start randomly singing as she darted across the stage. And LAUGHED at the dude with the alter-ego "Norman" who sang, once again, "You're Gonna Love Me." Not so much at the song, but rather at the speech he delivered prior to ...
But here's the thing ... why I'm posting this is that I'm a wee bit frustrated at all of the comments that are being strewed across the internet by the media. They're calling this the "Idol Upset" and if you read this from CNN it pretty much suggests that Adam is some sort of victim, that Kris didn't even think he, himself, deserved to win, and that conservative Americans voted against Adam due to being "speculation of Adam's sexuality" and for Kris because he apparently went on a missions trip. And of course, would never suggest the opposite - that liberal Americans voted against Kris and for Adam for the exact same reasons.
So - that irritates me (almost as much as me not being able to put spaces between my paragraphs in this post!). Because, I wonder if Kris' fans would cause such a stink with such degrading suggestions that Adam was basically non-deserving and null-in-void of talent - which is pretty much what I've been reading from Adam's fans. Pretty cruel, and I feel bad for Kris - who I felt deserved the win based on a likable voice and his creative talent with instrumentation. And it must be disappointing to think that the public believes you won due to your faith - not your ability.
Now, obviously, these people who write such things are few and far between and are NOT a fair depiction of all Lambert fans (I have many friends who absolutely LOVED Adam). But I can't help but notice that the media, once again, is unable to show an unbias in their reporting - that they have to bring sexuality, faith and beauty (handsome-ness, I guess) as a deterrent as apposed to just saying, "Great show-down, both were deserving, congratulations to Kris."
I guess, though, that would be unrealistic, though *smile*.
Posted by Tawn at 1:11 PM