[tv review: The Bachelorette - Only One Episode Left!]

Ok. So here I am, again, writing about the most ridiculous-waste-of-time: The Bachelorette. But, again, can I remind you that this is something my hubby and I watch when the kids are in bed, and laugh and laugh - or perhaps hurl a "are you kidding me??".

I won't give you a recap to the last 2 episodes ... my friend SL is SO good at doing those (here). But I thought I'd throw in a few of my two-cents, just for the fun of it. 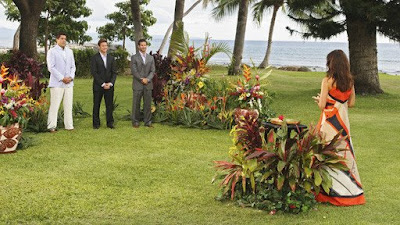 So, there were three guys (two episodes ago) ... Kipton, Ed & Reid. Honestly? All pretty decent guys, it seems. Kipton isn't really my cup-o-tea, but then again - I'm not looking *grin*. Reid - he really grew on me, and Ed has always been the guy I'm cheering for.

Was I surprised when Reid was sent home? UM, YEEEEAH. I thought it'd be Kippers for sure. And all that Reid had to say, really seemed sincere and genuine. I DID think it was sweet the way Ed came in and became Jill's console. Smart, Ed *wink*.

Then, this week was the "Men Tell All" episode. Blah blah blah. It was interesting seeing the "man-code" dudes and the "real-men" duke it out. Juan got more points in my book, while Dave, Sasha and some other dude made me gag.

Jake? Hmmm. He reminds me of a serious character being played by Jim Carey. No?

But the REAL clincher was the very, very last moment of the preview to next week's episode. Where REID is leaning against the banister with his OWN ring in hand ... what - the - heck??? Dude - she didn't pick you, sent you home, and you show up with a RING??

My idea of a good ending? Ed, Ed, Ed. Perhaps telling Reid to back off of his woman. But whatever the case ... it better be Ed.

My hormone imbalance won't be able to take any other ending *grin*.

But I'm happy that I'll be taking my big-ol'-belly back to our comfy bed and KNOW that I made the RIGHT choice 11 years ago!
Posted by Tawn at 9:43 AM

I too couldn't believe that Kiptyn wasn't sent home, I thought for sure Reid and Ed would be left to battle it out!

I can't wait for Monday night either! I had a feeling (before they showed it) that Reid was coming back to propose in the finale. I really like him. But I don't think she'll choose him BECAUSE she already sent him home. I think she'll choose Ed but I want her to choose Reid, or Kiptyn.

At the beginning of the episode I thought Kiptyn was going home too! I think there's more physical chemistry (at this point!) with Kiptyn and Ed, and that seems to be very important to Jillian. Plus, she needs a ton of verbal affirmation and Reid wasn't able to do that (although I think he would've, if given time). I feel bad for Reid, he's a nice guy and he's already gotten hurt once and I think he might be setting himself up to get hurt again :( I think the "big confession" will be coming from Kiptyn and will reveal why most of us girls have had an unsettling feeling about him. So with all that said... I think it'll be Ed :)

I am a little bit obsessed with this show... I can't wait for tonight!! I hope its Ed although maybe she won't choose anyone...