Tias had his first hockey practice in the community league. This was the first of 4 sessions where the little 5 year olds are evaluated and eventually put in to teams. 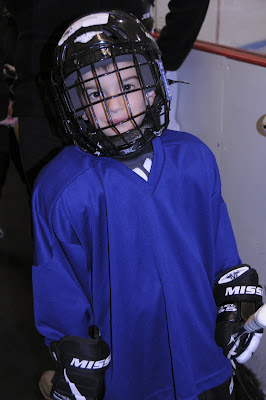 Mattias was so excited - he had LOVED hockey camp and couldn't wait to continue learning about hockey. But the experience was not quite what we had in mind, and FAR different from the affirming feel of hockey camp ... First off - there wasn't any interaction between the coach (evaluator) and kids or even between the boys. Mattias got bored very quickly, and ended up coming to the plexiglass to wave at my hubby and I. He's such a social kid ...
We found out that the majority of kids there had been in a hockey program since the age of 2. They knew the rules, what to do, where to go ... Tias only had 2 weeks of hockey camp, but it was more hockey drills than actually game-playing. So he needed more guidance, and wasn't getting the help he needed. 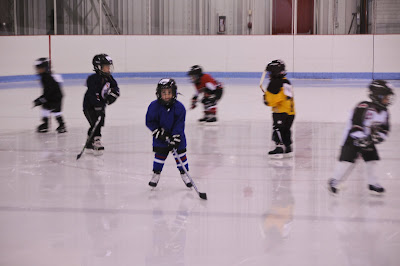 My poor hubby, though. He's so in love with the game of hockey, and Tias' wandering mind and lack of motivation really hit him. And he was worried that Tias would be evaluated unfairly because he wasn't doing all that he was capable of - by any stretch. But when we chatted with Tias afterwards, he told us that he didn't know what to do, and nobody was helping him. He also said that he didn't know where the puck was, and when he did - the other kids got there first all of the time, so eventually he lost interest.
My heart broke as I listened to the other parents, who were observing their kids. There was a log of bragging, negative talk about different coaches and parents, with one parent laughing at how her kid would gladly take off their gloves and "drop a few" on another player. Um. REALLY?? They're FIVE, for Pete's sake.
SOOO - we have some decisions to make. First off, if Tias WANTS to be there, then we'll continue on. But we have no desire to instill standards of fighting and negative competition ... we had hoped that the younger league would promote teamwork and self esteem. But hey - it's only the evaluation - so maybe that will change once they're on teams?
Do any of you have insight into sports with young boys? Is this just a rude awakening?
Posted by Tawn at 10:31 AM

That's too bad that it ended up that way. I agree with you about letting him decide if he wants to continue with it or not...maybe there are some better programs out there that will help him get to know the game better?? I am sure we are going to be starting all this fun stuff soon!

My brother played hockey for four years, my dad was his coach, which was such a blessing. Unfortunatly, the "hockey" mantality starts very young. The competitive streak begins young for both the parents and the children. The tough part is that most of the children are modeled this at home, which they then bring on the ice, because they don't know any better.

When the politics started getting too much for my bro, he quit playing (I think he was 14). He still loves the game and plays now as an adult in a pick-up league. Our family has played since our parents were kids, it's in our blood! *grin*

So, that said, I would walk with caution.

We have had great experience with soccer. It is only now starting to get a bit more competitive and Luc is in his 4th year. Up until this point, they haven't even kept score. (The kids have, mind you)

oh parents hey! Did you read about the passive aggressive mom I met at Ballet? I guess "those" parents who live their dreams through their kids are unavoidable.

If you were watching it from the sidelines without hearing any of the other parents, what would you think?

ie: How much of a role do the other parents play in the decision?

That being said... My feeling is that *every* competitive sport is going to wind up pretty much like the example you just saw. It might take another year or two or even three if you're lucky... but the very nature of "competition" means the "weak" (those who prefer to play for fun and have fun) are weeded out from the "strong" (those who play to WIN WIN WIN!).

I hated competitive sports because of the ridiculous (to me) atmosphere, even though I was pretty good at them. Being good doesn't mean he'll do well.

But to counter that argument.. I think one session (or perhaps anything less then a few) is too soon to make a decision, either he or you. I think sometimes it takes a few tries before he, or you, can see how things will unfold.

(ie: If we all had the choice to stop doing anything we didn't like the first time we tried it... there would be no such thing as caviar, good wine and probably high jumping. ;-)

Hi Tania - that's too bad that Tias didn't have a great first experience. Like Rebecca - we have found soccer to be pretty relaxed with the kids - emphasis on fun. Ethan is in roller hockey at the sportsplex - he did spring league and is now in the winter league and there wasn't any of that type of talk (at least we haven't heard it). In the list of rules parents get we are encouraged to cheer for both teams and that happens. So maybe if he loves hockey but you want something less competitive check out roller hockey. They still have an end of year tourney with 1st, 2nd and 3rd but it's fun. I think though he should try a couple of games to see if he likes it more than the "try outs" and so you can see what parents are like at the games.

Hello DiMeglio's, soooo... the fun has begun. Well I can tell you from years and years of experience, that one session is no big deal. My son,Jeff, played right up until Junior B level and as a banker he stills loves to play hockey when ever time allows. We currently own a Jr. B team in Aldergrove. We have seen it all!!!!

But to encourage you..... this is the hard part of growing up in the sports world, the part where you participate with people who are so emotionally challenging. Yes, it is true.... it's the parents who are the hardest to deal with.It happens in each and every sport no matter where you are. It only took a year on the ice with a lousy coach and parents who dictated to that coach to see that if you want to have a quality time on the ice then you have to step up and do it yourself!!! This is where Lu fits in. His love for hockey can fit the need as a coach, for lots of little boys just like Tias,so that they can enjoy season after season of enjoyable games and comraderie with other families while growing up to become young men with strong work ethics,teamwork, commitment and determination to do their best on and off the ice.
Evaluations aren't all they are cracked up to be and can be good and bad. It all depends on the evaluator(whom are just ordinary run of the mill dads who just want to be doing something with their kids) Some are looking for size, some for skill, some are just looking for a way to put all their friends on one team. So make your own team!! And be the evaluator somewhere down the line. Thing is, all kids have to start somewhere. Tias is just at the beginning and within a very short time, they will all be at the same level of skating and puck handling.

There will always be parents who set themselves and their children above others, but we have found that it is alot more fun to silently watch over the years as those very kids are pressed by overzealous parents and they quit, slow down or just don't make the cut. I still have to listen to this and our team of boys are 16-21 yrs of age!!!!

The truth is that if Lu could possibly bring his love of the game to the arena, share that along with his skills, Tias will not only thrive, but so will so many other boys who duly deserve to enjoy the game of hockey. Then you will know that the little fellows will be gently prodded to become the best they can be at each level, and I know that Lu would be honest and fair with each one. They would be blessed to have him as a coach.

My husband still has young men run into him and thank him for the years he committed to hockey and to baseball. It was his way to shine with the Light that is so needed in this world. I know for fact that Lu would be a blessing to so many families over the next few years of sport. And coach Dad's have to start somewhere too!! It's easier at the beginning so that they can grow in their teaching skills along with the boys.

So all that to chew on, but most of all, be encouraged to know that there are far more parents just like you who want sports to be a place of growth. You just happened to get a taste of what you don't want to turn out like!!!! Keep smiling and know that God has a place for Tias with his skates on!!!!

I would check around, there are probably other leagues to check out... where Matthias can enjoy hockey, practice his skills, makes some friends and where you feel more comfortable in the stands!

Ahhh how I remember being a first year hockey mom (now, a jaded hockey mom of 4 with rep teams, dev teams and house teams under my belt).

Evaluations ARE the boring time, particularly for your average, normal, beginner player. Its essential so teh teams are "fair" but ... still boring.

I would try to wait it out until the teams are set ... and see what the coach is like. Practices for 5 year olds should be alot of fun and our kids all enjoyed it.

Our 4th son has quit hockey, he just never really liked it (played from 4 until 8 though) and wants to try something new this year.

Our oldest is skilled and gifted and the Captain of his AA rep team. We have a mix, spend countless hours at the rink and overall have enjoyed most parts of it.