I just glanced at the clock - and it's 10:39pm as I write this.   My hubby's been away for a few nights and once the kiddies have been in bed, I've been busy sorting out photos and making appointments with Redhanded and such ... But I always seem to have a "post" brewing ... and so I thought I'd share this while it's fresh.

When I first got married, I was a piano teacher.  I had a large studio, and it was my passion.  Because of this, I worked in the afternoons and evenings ... and my mornings were free.  I used to clean, do laundry (like, every day because I felt so guilty about just hanging out ...), cook, bake ... and I would have a movie on to keep me company.

One of my favourite movies was, "While You Were Sleeping."  And as the earthquake in Haiti continues to weigh heavy on my heart, one of the lines in the movie keeps ringing in my ears.

The scene was something like this:  The good looking guy is in a hospital bed, confessing to the girl (who is madly in love with him) that he isn't such a great person.  He lists off a bunch of things - and when he pauses, the girl says, "Every morning you give up your seat," (a subway seat, I should mention) to which he replies, "That doesn't matter."  And she softly says, "It does to the person who gets to sit in it."

And that's how I'm feeling about Haiti.  It's so easy to be overwhelmed, to feel like your teensy contribution doesn't matter.  But it does to the person who receives it.  Whether it be a cash donation, donating your time to help an organization, donating clothes or shoes ... whatever.  Nothing is too small.  Your help means that you touch someone's life that wouldn't have been touched if  you hadn't.  It's that simple. 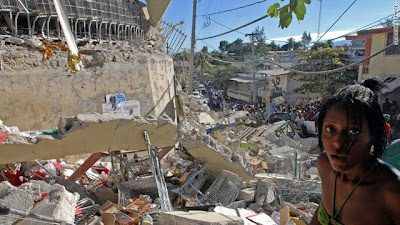 Another little thought that has been going over and over again in my mind, came from our pastor last week.  He was talking about what some people do when they shake hands with someone important ... that they may feel like they don't want to wash their hands for a while.  To savour it.  To keep that moment from getting wiped off.

I pray that the poor, the orphan, the broken, the abandoned, the widow is like that for us.  That when our hearts get touched by something as devastating as the earthquake in Haiti, that we don't just wash it off of our conscience; that it becomes yesterday's story;  that if we gave a few dollars, that ends our responsibility.  It will take a long time for those people to rebuild what has fallen, and the scars of the loss will show on everyone's brow there.  They will be rebuilding long after we've forgotten.

So if you had thought you might do something, but now think that the hype is maybe over - or that your lack of contribution won't be forgotten so why bother - I hope that you reconsider.  And I hope that 2010 marks a year of generosity that no one could've fathomed.  That not just lives, but generations will be forever changed - not to give ourselves a pat on the back, but just because it is the right thing to do.

I have some things brewing right now, the main one being a hopefully massive Swap Meet where all proceeds will be going to Haiti.   The idea being, not everyone has cash to give, but most have things that they can sell.  If you'd like to be a part of this - comment and I'll be in touch with you.  Or maybe you have meant to donate a cash gift of any amount, but haven't yet ... it's not too late.   You can click here and donate to World Vision, an organization that my hubby and I personally support and stand beside.  This is our personal link and will be counted towards our efforts with the Swap Meet.

"In everything, therefore, treat people the same way you want them to treat you ... " Matthew 7:12 (New American Standard Bible).

Email ThisBlogThis!Share to TwitterShare to FacebookShare to Pinterest
Labels: [be challenged], [talk]

Hey Tania,
I have about 3 boxes of Partylite product from when I was a demo. It's a few years old but a few current Consultants are always calling me with client's needs (piece broke, wanted a match set but the product was discontinued before they got to it, etc). I am happy to donate this product to the Haiti swap meet. Remind me the date/time and I will do my best to come sell it myself...