[be challenged: The Race]

This past weekend I entered my first 5km Race called the "Spooktacular".  I actually wasn't nervous - I knew that I could easily run the 5km, but I didn't know the route and also really wanted to push myself for my time.
I arrived - alone.  My hubby and kids were at hockey practice and that was a bit of a downer.  I don't really do anything that my kids can come and be a part of ... and this being my first race, it would've been nice.  But, I knew it just couldn't be - and that was ok.
I arrived early - and found out that there were a bunch of kiddie activities for Halloween before the race.  People were dressed up in costumes - I was dressed in full running gear.  I was taking this very seriously  *grin*. 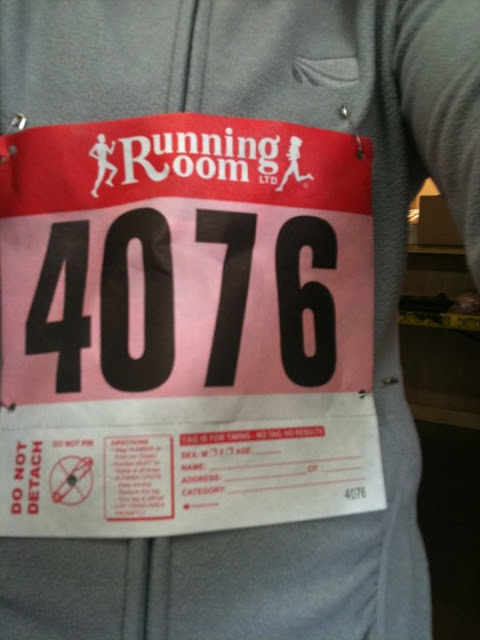 The long and the short was that I did my best.  Literally.  My time was 33.19 ... almost a minute less than my previous best.  Although - my iphone app that I use for my runs actually said I only ran 4.65km.  So - that leads me to think that the $4.99 app really isn't that accurate ... and now a running watch is on my "wish list" for Christmas.    I mean - I could be running much farther than I actually think.  Or less *shudder*.  A 5km race isn't going to be 4.65km.
The best part?  The finish line, of course - with my time in big orange flashing numbers.  And my dear friend, CW, who surprised me with her son ... and cheered me on as I sprinted my heart out.  I sobbed when I crossed the line ... and her eyes welled too.  I'm so happy that I wasn't alone for that moment ... it made it just that much more special.
SO ... this is something that I never thought I would do.  It's been a challenge for me for the last few months ... and I really can't believe that I'm CHOOSING to enter races.  I'm registered for a January 1st 5km and a 10km at the end of January.  Hopefully I'll be able to push through the winter weather and train.
A winter running jacket is on my wish list too *grin*.
Have a great one!
Posted by Tawn at 8:30 AM

Email ThisBlogThis!Share to TwitterShare to FacebookShare to Pinterest
Labels: [be challenged]

Congrats on a spooktacular race!!! just a suggestion...the Nike plus is incredibly accurate, it hooks right into your ipod and tells you your distance as you go:)