[talk: The Concert That Never Was.]

Oh boy.  You are NOT going to believe this.

Yesterday I was so excited ... like, crazy excited.  For 3 months I had been waiting with two tickets to a concert that my hubby had said, "go - have a great time - pick a friend - I'll stay home with the kiddies".  I convinced a girl-friend of mine to join me - and it was going to be a crazy-fun night.  At least that was the plan.

My hubby came home from work, packed up the kids and headed to my in-laws for dinner.  I got in his car, put the band on through the system, and headed to pick my friend up - bopping around in the car like a crazy person at every stop-light.

I was so excited.

I picked her up, and we headed to the concert venue, about a half hour away.  We were early, so we went to get a bite to eat at Milestones.  When we arrived, I mentioned to the hostess that we were in a bit of a hurry ... we had a concert to go to at 7pm.

That's when everything changed.

"Oh," she smiled.  "Which concert?  It was crazy here last night - with the whole Maroon5 concert and all."

I turned to my friend and laughed, " ... can you imagine if we had missed it??"  Her eyes met mine and then my face dropped, my heart skipped a beat.  I panicked.

I hung my head.

I checked my Iphone calendar.  September 13.  I had written it down wrong ... and honestly?  I felt a little sick.

I slowly made my way back into the restaurant where the servers were watching against the bar, waiting to see what I was going to do.  I was dumbfounded.  I looked at my friend ... I shrugged my shoulders .., " ... we missed it.  I am so sorry."

Her and I ended up having a lovely dinner, with a great time of catching up and a much needed yam fries appy - plus two shared desserts ... The restaurant felt so bad for us, they took the cost of the appy and dessert off of the bill - so that was really nice.  We called it a night at around 9pm, and I blasted music all the way home, clapping and wha-hooing at the end of every song in true concert fashion - which my friend found quite amusing.

I came home - and my hubby just smiled and shook his head.   He had a couple of buddies over, and they were kind enough to not mock me too much ... And then I promptly went online to see about the possibility of seeing another show.  The next concert with available tickets was in California.  Hmmm.  I looked at my hubby with the best puppy-dog eyes I could muster, to which he gave the knowing, "not.a.chance." look.  Fair enough.

I mean, really.  Who misses a concert??

Hmm.  I guess I do.  But in all of this,  there is one good thing ... I will never, ever forget my first Maroon5 concert experience.  Or rather, the lack there-of.

Here's a photo of us before we realized that our night of crazy fun would end up being a night of  intaking an insane amount of calories ... and that it would be music-less. 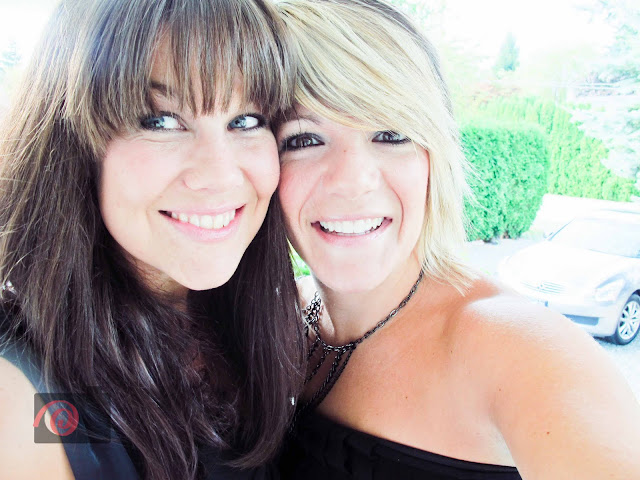 Makes me so mad.  Woulda-coulda-shoulda ... if I had just checked.  Or printed the tickets out on Sunday.  Or read the paper about upcoming events.  Or if I had just realized that when my friends posted pics of THEM at Monday's concert - that I had missed it, and try to make attempts to head to Washington State for last night's concert.

I have no one to blame but myself.

Oh.My.Goodness! If that happened to me, I think I would not tell a soul...of course, such a faux pas would leak out for sure :).....but still, you are one brave girl to put it in a blog for everyone to read. I now feel much better about the things I forget...thanks for encouraging me!

I feel horrible for you but did have a laugh when I read this...seriously, you're SO organized! I would have been so picked if that happened to me -- good thing you had a good sport with you ;)