I have this friend ... you may have heard me speak of her before.  Melody Davis, of the world-famous "Melody Davis Photography".  Ah yes, the one and only.  Aside from the fact that she really is just plain genius when it comes to photography - she's a pretty darn cool person.

And her hubby's ok too *wink*.

She called me up one day and told me of a little opportunity she and her hubby, Eric, had.  They were going to be travelling south to Seattle and meet up with a wedding client.  Afterwards, they were heading out on a white water rafting adventure, as the bride and groom both work for a company called Outdoor Adventures.  Well, actually - the groom and his family own it.  "So," asked Melody.  "Are you in?"

The plan was simple - head down to Seattle on Friday night, after tucking the kiddies into bed.  Then she would meet her client on Saturday morning -  and afterwards we'd head to the river and get ready to raft our brains out around 2pm.  After the adventure, we'd have a hot tub, a BBQ dinner - all provided by Outdoor Adventures - and then head home Saturday night.

So ... we all met up last Friday night, and headed across the border.  And first things first - ICE CREAM at the Edaleen Dairy.  Mmmm.  Miss and I had no problem downing these babies ... 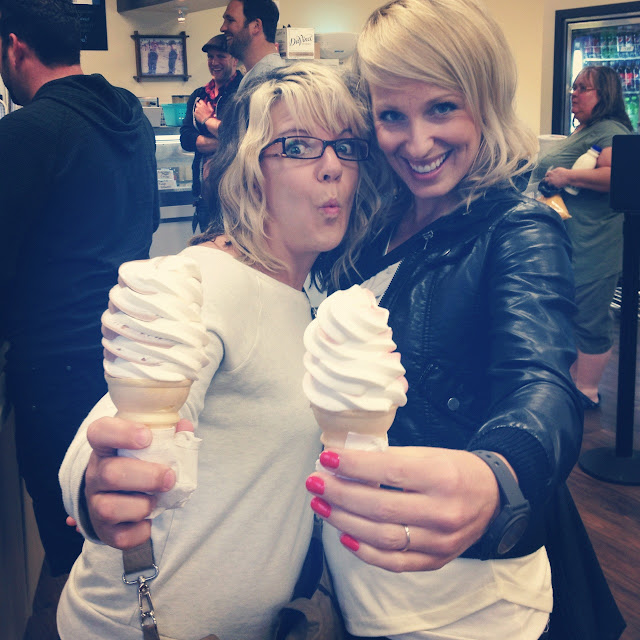 The drive down was full of conversation - a rip-roaring game of "would you rather" (don't ask ... it's a painful game of who can come up with two ridiculous scenarios that you have to choose from ... ) and even some interpretive dance to the tunes the front-seat-dj was playing.  Eek.

We arrived at the Embassy Suites, dumped our stuff off (all of us would be staying in one room, Lord have mercy) - and then we were off again.  Sure, it was 11pm, but we were hungry ... P.F. Changs here we come. 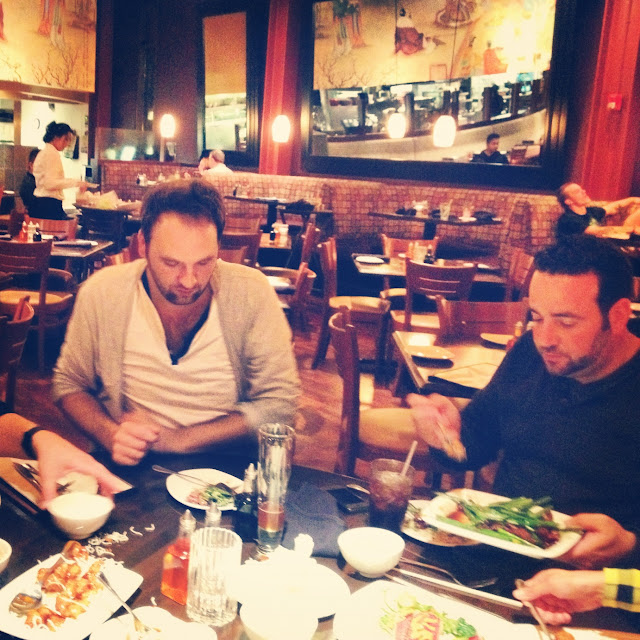 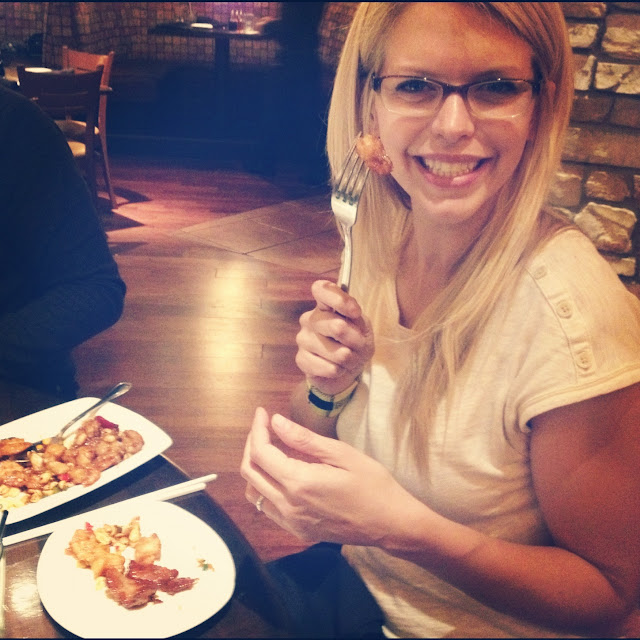 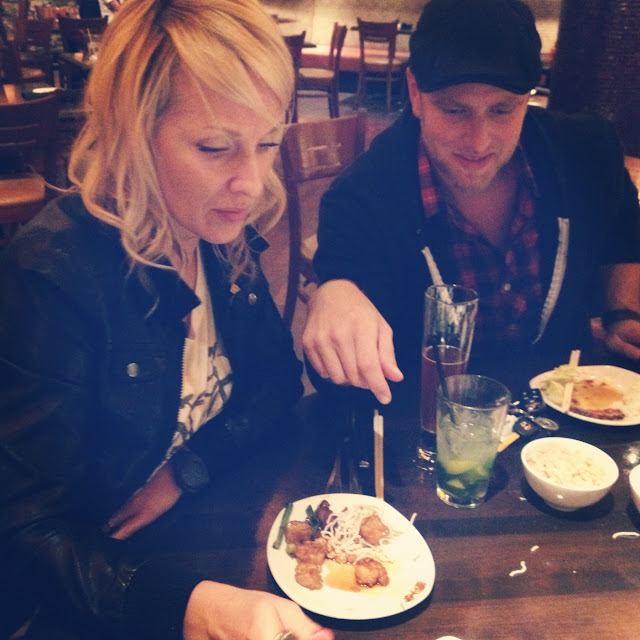 We were stuffed, and tired.  Good thing the hotel was great ... although we all didn't exactly sleep perfectly.  There was a snorer among us - I'm not going to name any names - but it was alllll good.   Sorta *grin*. 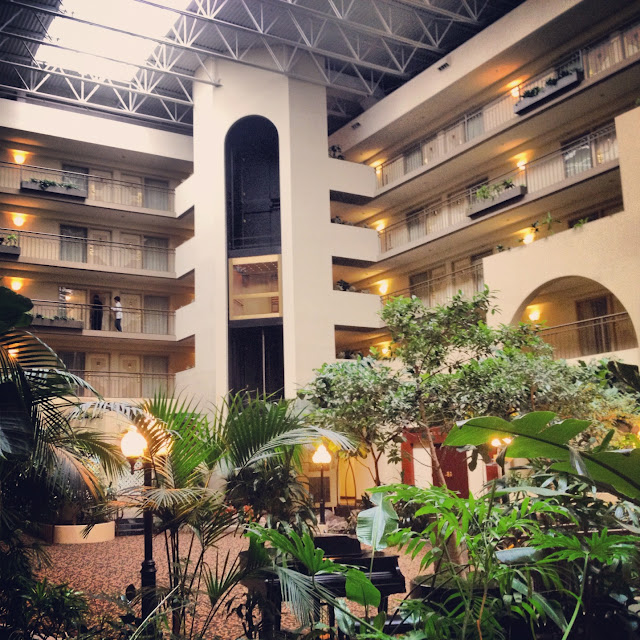 The next morning - breakfast,  Embassy Suite style.  YUM.  And these two - Eric and my hubby - looking well rested, no?  *GRIN* 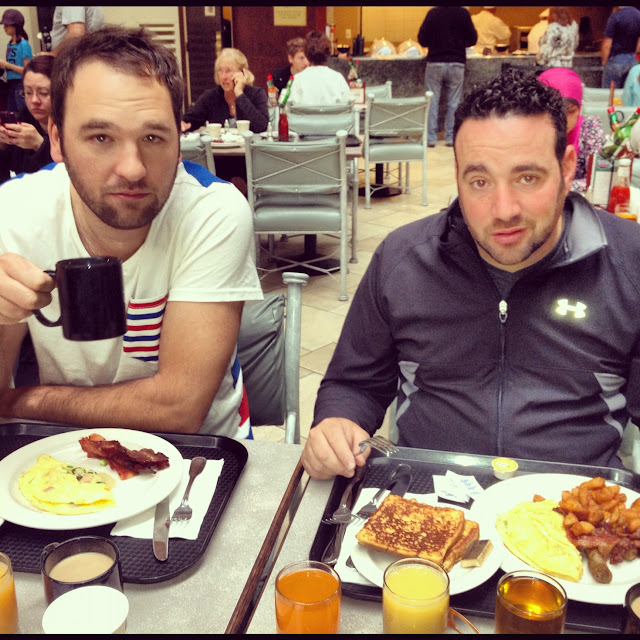 After breakfast, we headed to the location where Melody was meeting Erica, the bride - and our future raft guide.  They met - and the rest of us hung out for a bit, and then got some coffee.  Well.  I should re-phrase that.  THEY did.  I slept in the back of the minivan like a five-year-old. *grin* 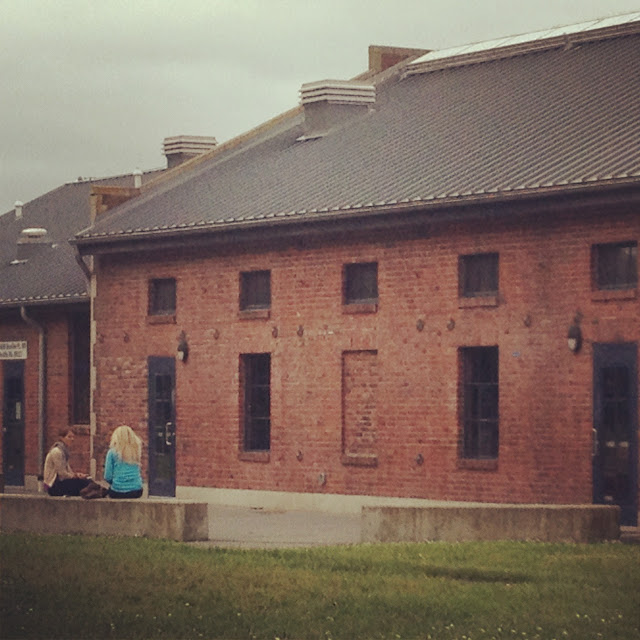 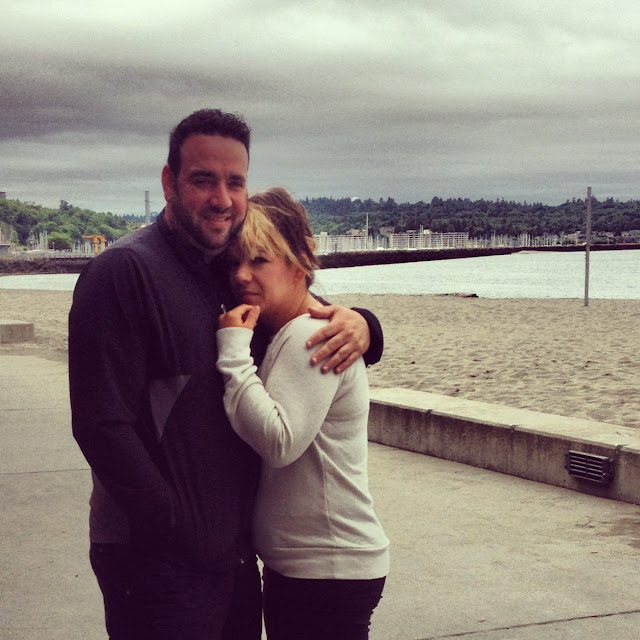 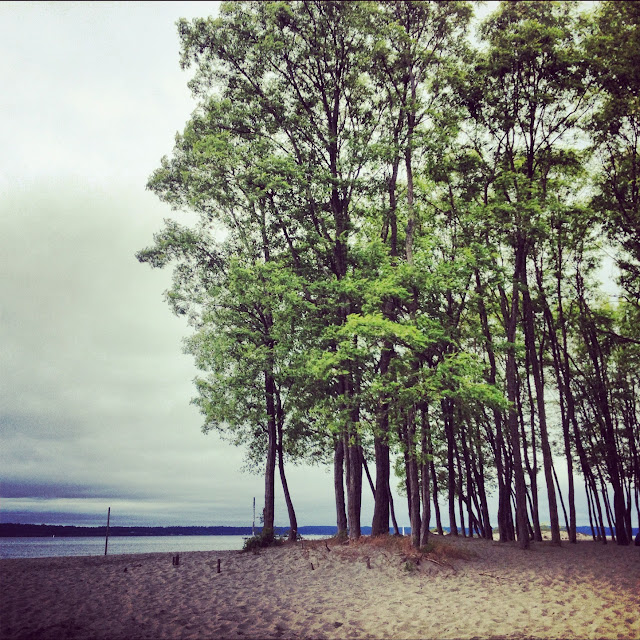 After the meeting, we were on our way to Index, WA - the home of Outdoor Adventures.  But first - a stop at a shop simply called "Bakery".  A mom-and-pop diner with the BEST food.  Mmm. 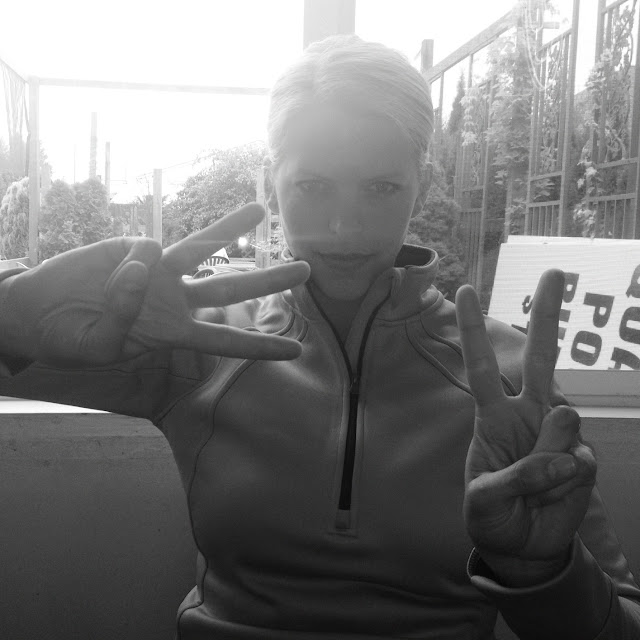 I look pretty rugged here.  Sleeping in the back of a mini-van will do that to you. 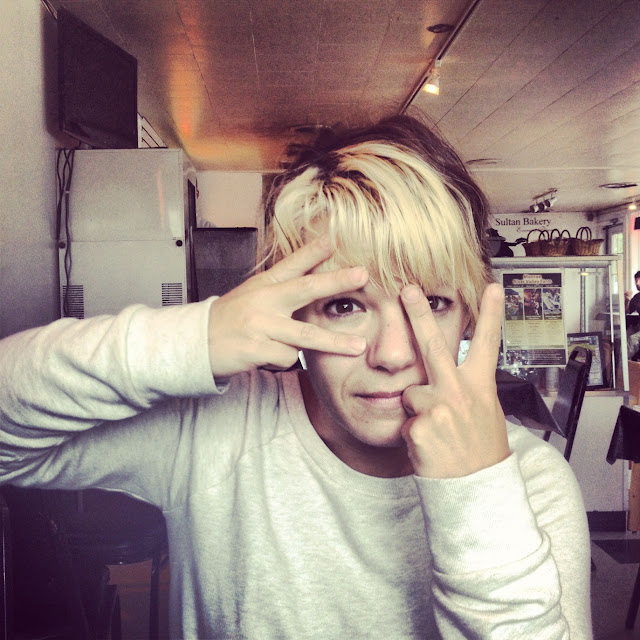 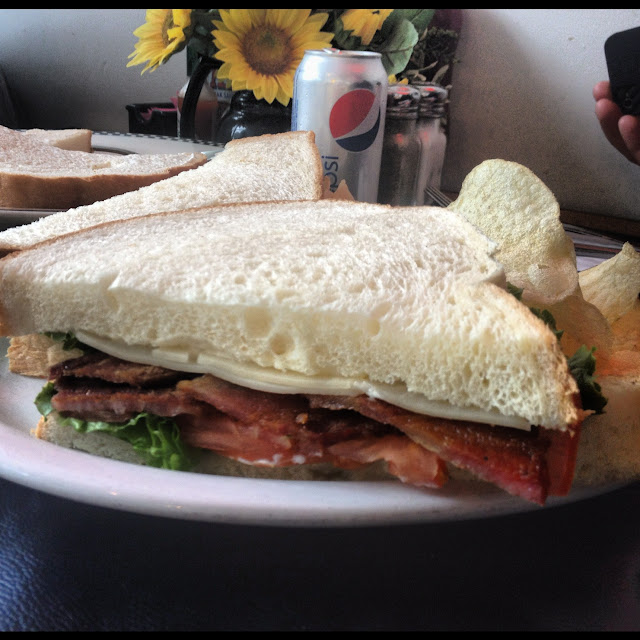 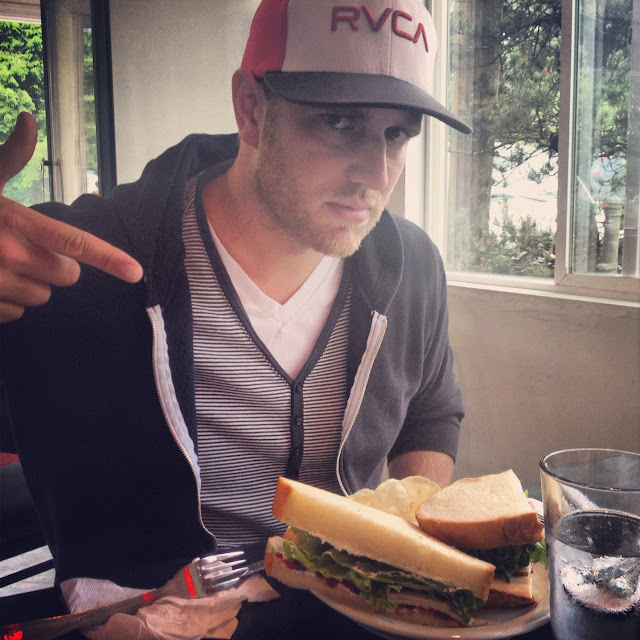 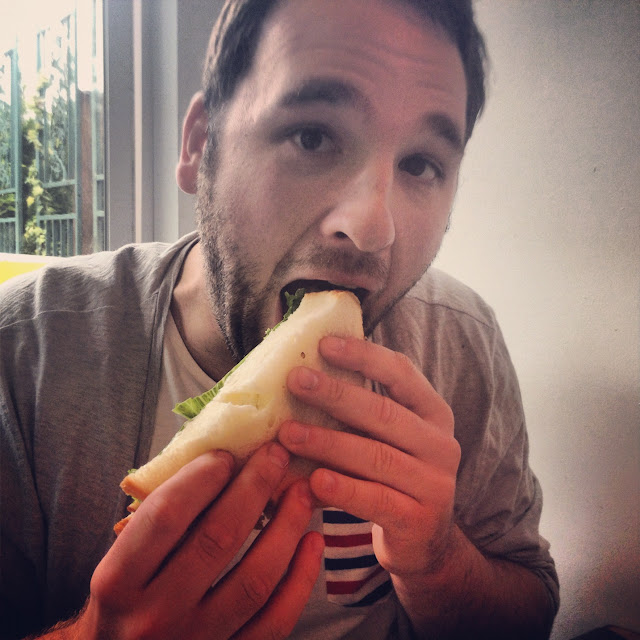 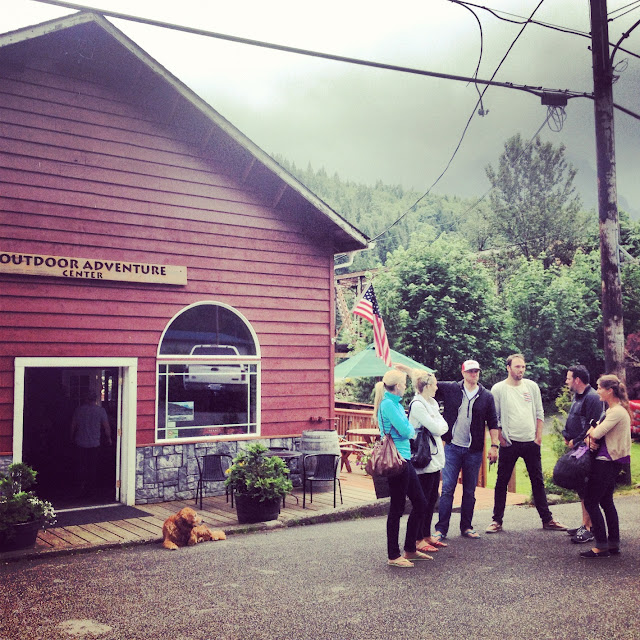 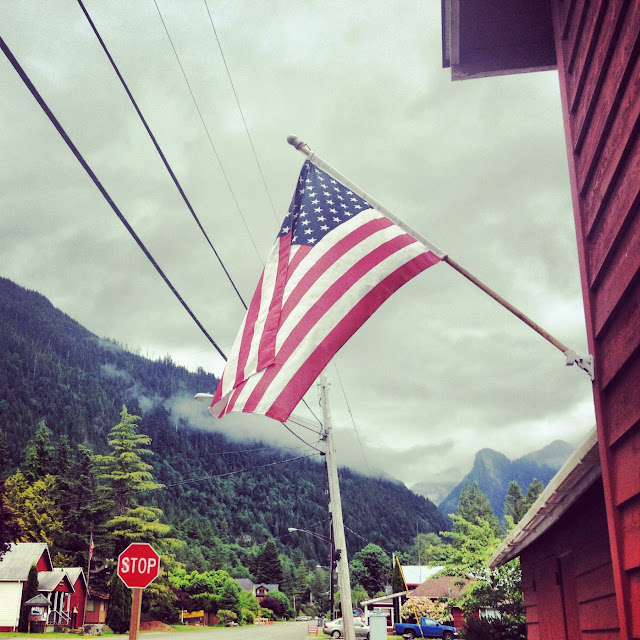 We signed our lives away ... 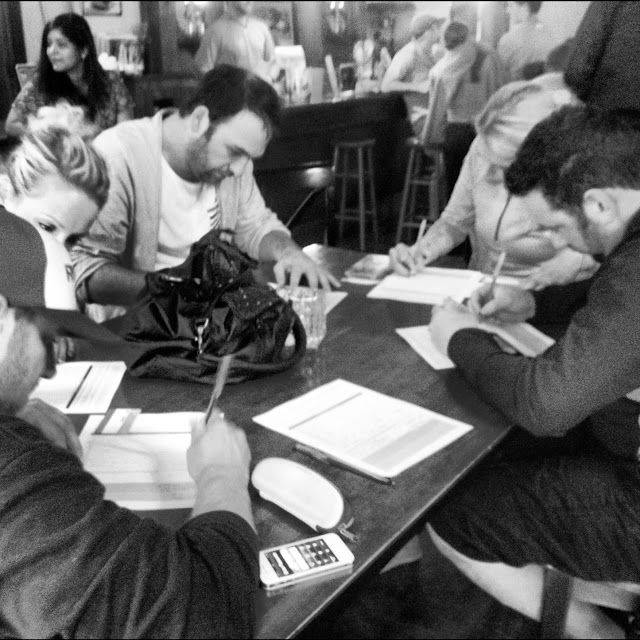 ... and we got into some hot-looking wetsuits ... it's amazing how you don't care if you're being dumped on by rain when you're in a wetsuit. 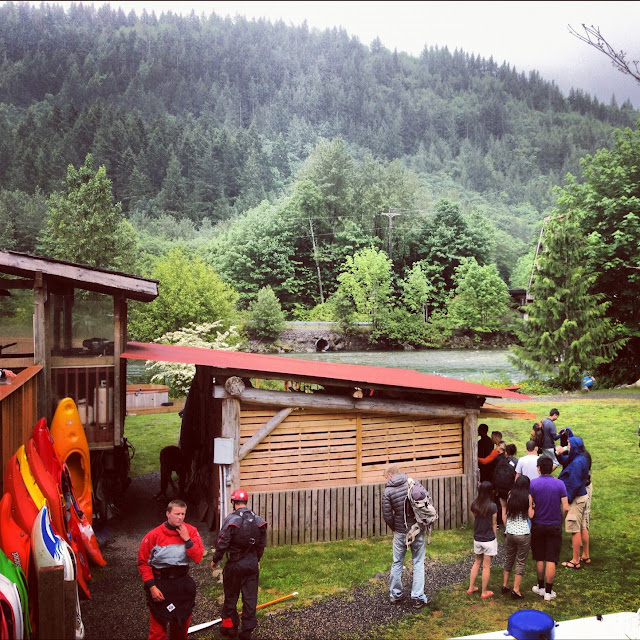 And how they EVER let us man a raft, I'll never know.  The three hubbies were comedy-central ... and gave us girls small heart attacks throughout the trip. 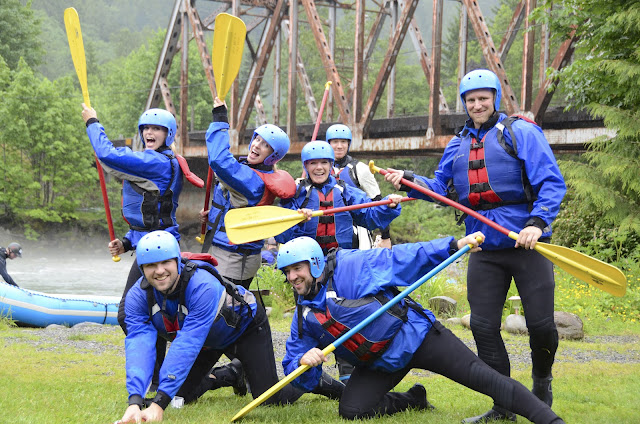 The river was a 4-5 grade, and the highest grade river in Washington State.  To make it even more adventurous, there was a fog on the water - like out of Braveheart or something ...

We watched a safety video, had some on-raft instruction, and then boom:  we were let loose.  And the first batch of rapids came immediately - but were quick and then over.  It gave us time to talk about what just happened, what to do better etc ... The guides said they had never, ever seen it like this ... you could hear them talking quietly to each other in the back of the boat.  They were anxious.  It was obvious.

But our guys ... they were oblivious *grin*.

The next set of rapids put our raft up against a boulder, sideways, and Jerrod kept screaming an instruction (can't remember what it was now ...) but it meant everyone UP the boat.  The rapids were crashing, I thought we were gonna flood and tip and man - it was INTENSE.  But - we got out of it, all in the raft ... and we were high-fiving at the next down-time, like a bunch a pros.  Ha!

We did a few more sets of rapids and then the Boulder rapid was up.  All the rafts in our group pulled to the side of the river, and we all got out.  We trekked it down the river to see what was coming up ... and were given the choice to walk it, or raft it.

Now ... I've gone rafting many times in New Zealand.  I love it ... but I have a healthy respect for the water.  My uncle was found drowned in the Auckland harbour when he was 17 (long before I was born), and my parents also had a friend who drowned in the Fraser River back in the 80's.  I know that accidents happen and honestly - with the fog and all ... I simply chose to walk.

I was the only one of all the boats to do that.  But honestly - I was ok with it.  And I watched everyone go down - even with a person falling out and being tossed down the river ... but my raft did great ... and they came and picked me up at the bottom to join them.

There were still many more grade 4 rapids ahead, but first - a "calmer" spot where Jerrod told us we could try swimming.  For some reason, in the rain and fog, I thought I was in Penticton going down the Canal (for all you BCers).  But no. That, it was not.

Mel's hubby, Eric, asked if he could throw me in ... as he had a camera on his helmet (videoing the whole thing) and it would make some great footage ... and like an idiot, I said, "sure".

He CHUCKED me in *grin* and the water hit me like a brick wall on my back.  It knocked the wind out of me and the water was FREEZING.  Hypo-thermia sets in 3-5minutes in those waters and after just a few strokes, the cold had sucked the life right out of me.  I wasn't in any danger, I was only a paddle length away from the raft - and KIng Jerrod pulled me in with no problem.  But then I got the giggles, frozen - with my face smeared against the bottom of the raft and my legs shooting up out the side of the raft.  And I wasn't alone -  everyone else who had gone in was ridiculously cold got the giggles too.  My goodness ... it was SO fun, as crazy as it all sounds ...

We rafted for another 1/2 hour or so, standing in a circle on the edge of the raft, linking arms, doing squats.  Then doing a "pop-wheely" by all of us being in the back of the boat, bouncing up and down  ... And after acting like a bunch of children *grin*, we headed back by bus to the base. 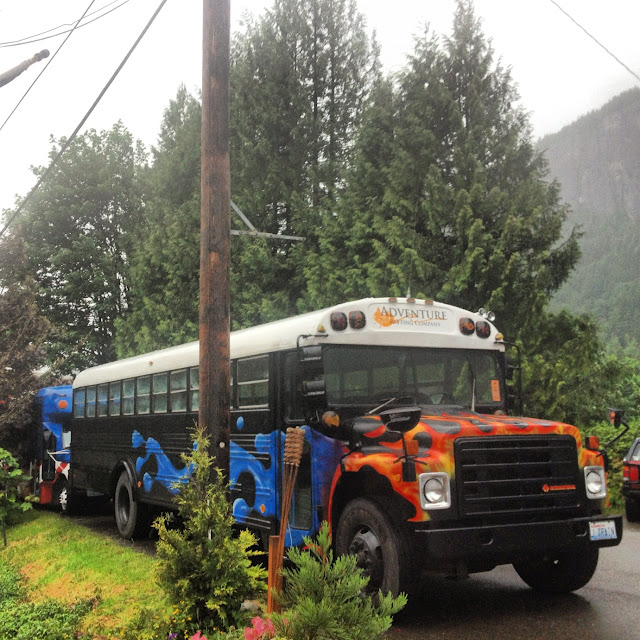 There, we hot-tubed (mmmmm .... sooo nice), had a yummy BBQ steak dinner and chatted with Jerrod and Erica like we had known them forever.  The night was getting on, but none of us wanted to leave ... 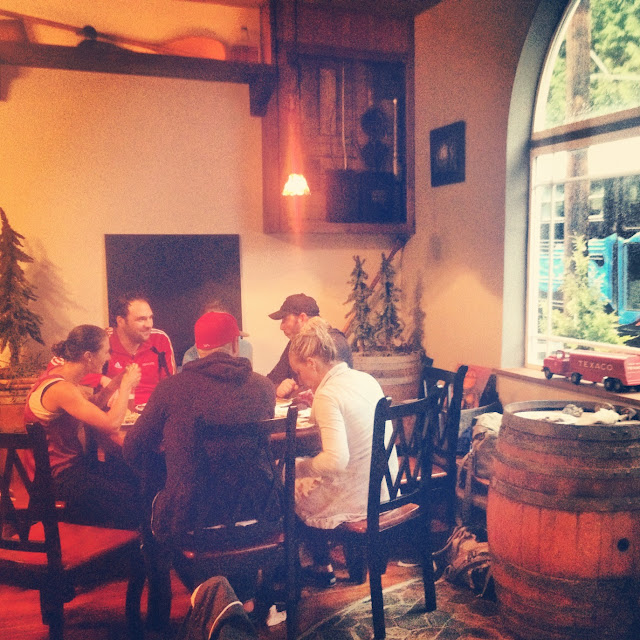 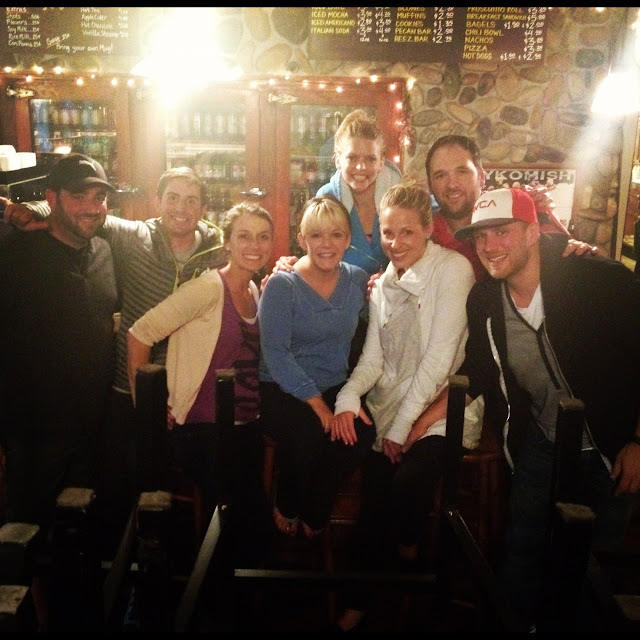 We drove back home, and were in bed by midnight.  It was SUCH an amazing 24hrs ... a fantastic experience and I HIGHLY recommend anyone trying it.  And if you live in the Vancouver/Seattle area - GO to Outdoor Adventures.  For $90/person you get the rafting and dinner ... plus they're working on getting a hotel up and running, along with some crazy ziplines too ... you can check their site HERE or "like" them on Facebook to keep up with their promotions and such ...

And just a little info on the pics ... both Mel and I left our fancy schmancy cameras at home.  These pics were all taken with my IPhone ... such a great little gadget.