I grew up in a "hockey" home.  What I mean by that, is that our little family loved watching games together ... not that anyone in our home actually played the sport *smile*.
My hubby is a hockey fan as well, and over these past couple of months, we have hosted many gatherings in our home to celebrate our city's team.  My hubby also is a partner in a company that has seasons tickets, so he has been able to attend most of the games - and even brought me to a few.
I was at the game when the Vancouver Canucks won the President's Cup.  I was at last Friday night's game when we brought the series to a 3-2 lead.
And I was at Game Seven last night.
We were nervous, right from the get-go.  From the moment I woke up, I had butterflies.  For the game, yes - but also because I knew that there was a possibility of history repeating itself.  The riots of '94 were traumatizing for the city.
So, we headed down ... and I, of course, brought my point-and-shoot to document what we had hoped would be a victory.
It started exciting enough ... including seeing the Boston Bruins team playing hackysack with a soccer ball as we drove in to the underground parking at Rogers Arena. 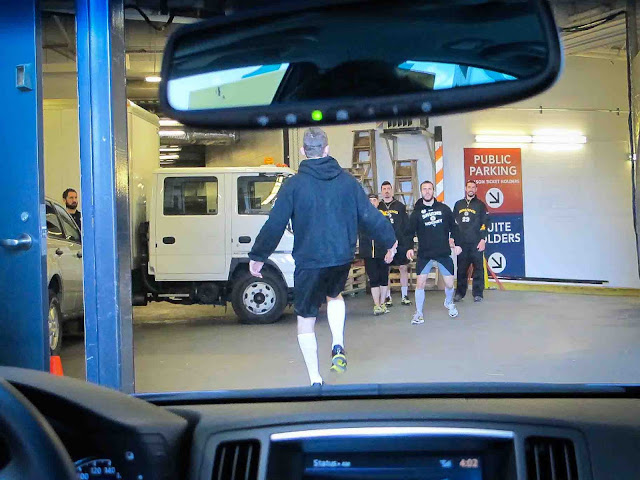 We were so excited ... the energy in the arena was full of high spirits.  People walked in through the doors and hugged each other ... men were high fiving, and the few women that were there *smile* were obvious fans.
We believed. 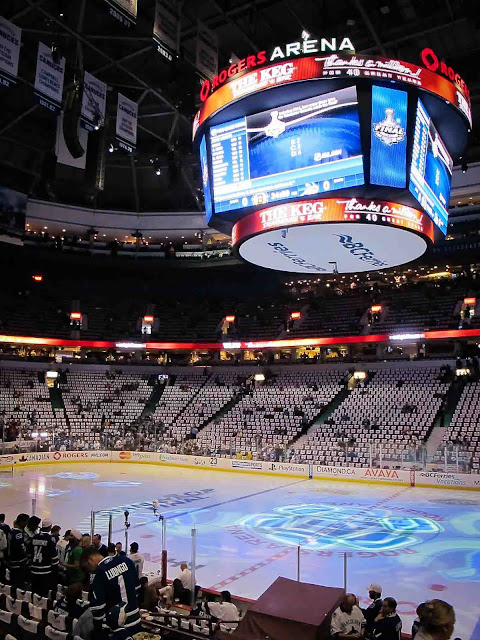 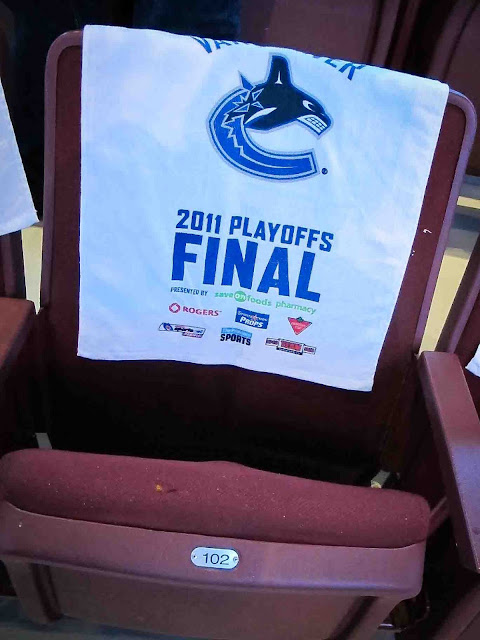 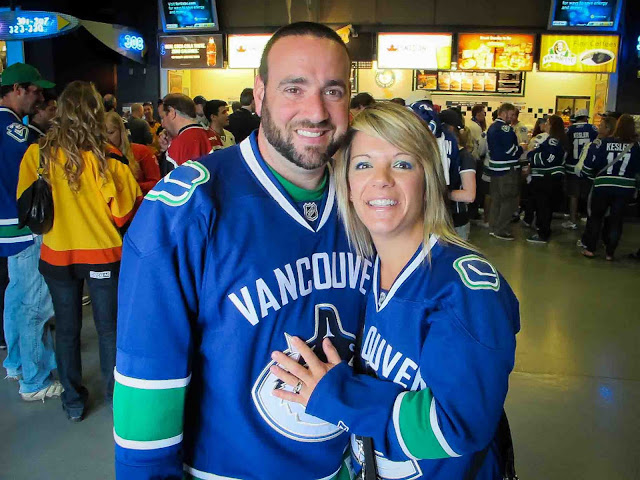 The game began with the national anthems of both the USA and Canada ... and the obvious pride of the fans was thrilling.   People were composed, nervous, looking to each other for some added confidence in a "we're gonna win this one ... " look. 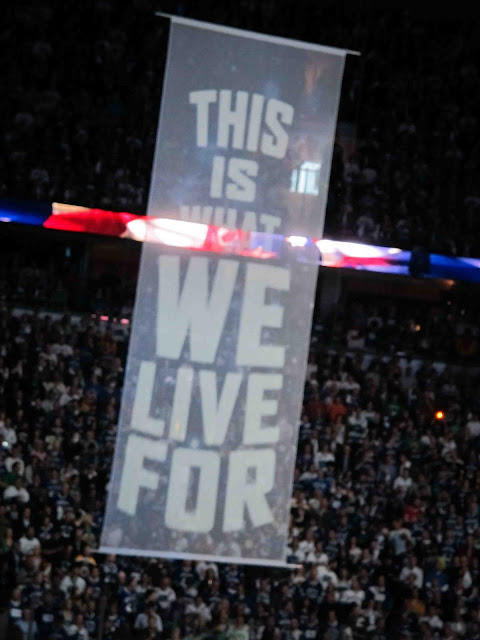 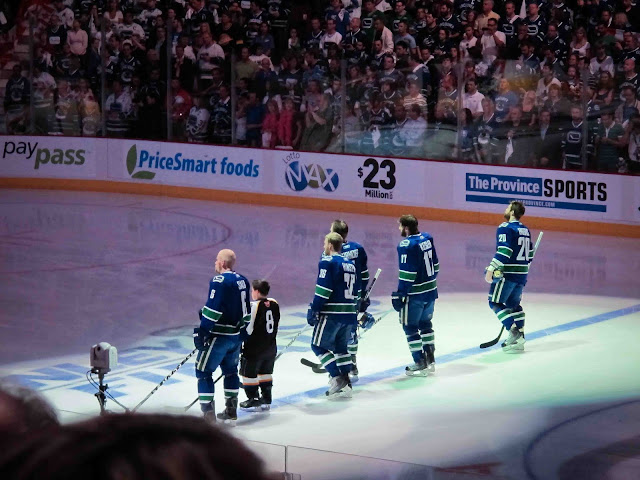 The game was fair.  I've attended many games where fans booed and hissed about reffing and such.  The reality was ... the Bruins simply played better.  They deserved to win ... and although it was deflating and very sad, there was no one out of control that I saw inside the arena.   We all knew that this just wasn't going to end the way we had hoped.
The Bruin's goalie, Tim Thomas, was incredible.  We joked that there was a magnet in the puck - and he was wearing a suit of armour. 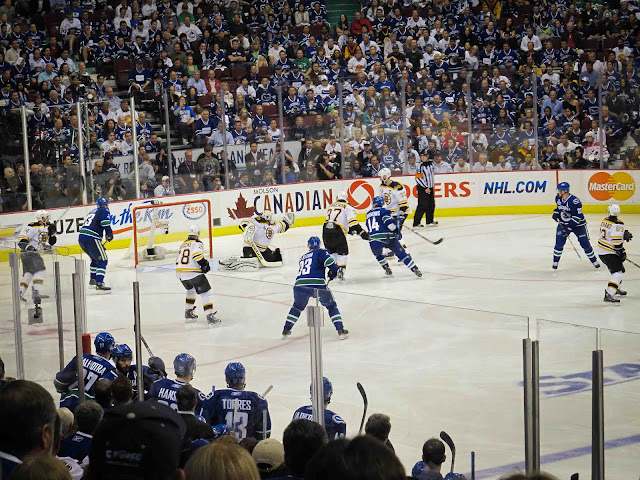 We outshot them 37 - 21 ... so our goaltending is what really made the whole game.  It was Thomas vs Luongo.  And Thomas kicked it. 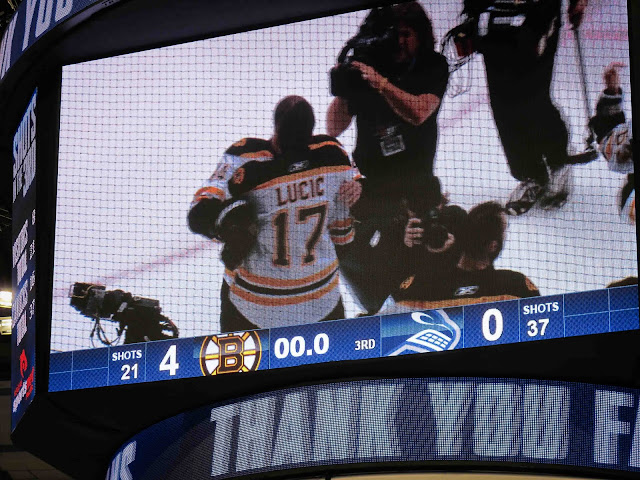 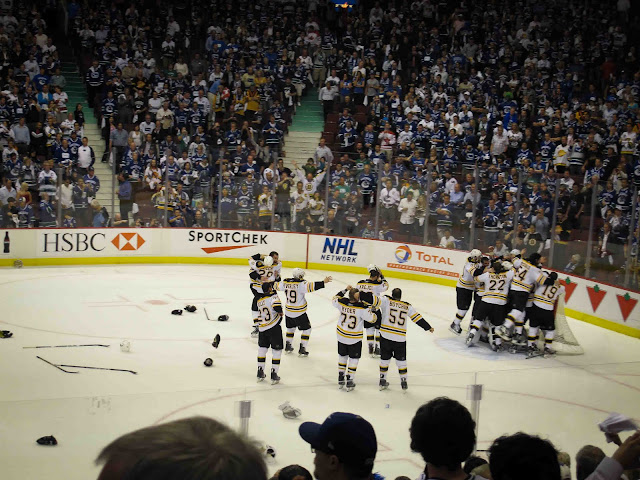 I felt so sad for our guys ... You can say what you want, but no guy gets to Game Seven of the Stanley Cup final and doesn't give it his all.  So much work, so much effort ... and it just wasn't enough this time. 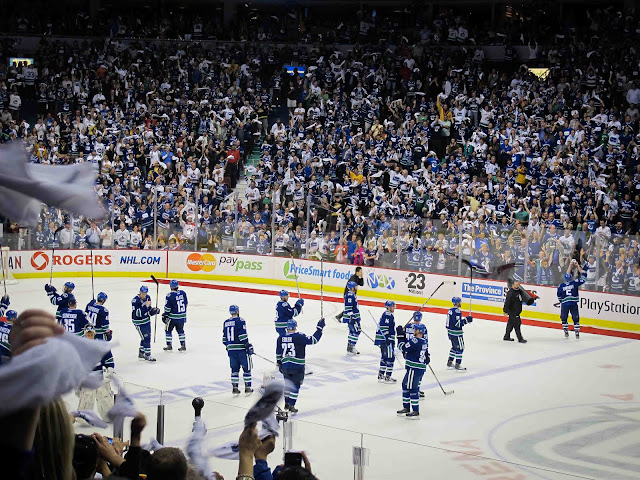 As the crowd cheered, "go Canucks go" - long after the game was over - the players came out and "thanked" the crowd.  It was so emotional.  These were our guys, our team.  I wanted to tell them what a great job they did.  They may not have won Stanley - but being the second place team, losing in game seven, winning the Presidents Cup and the Western Conference ... it was an incredible year. 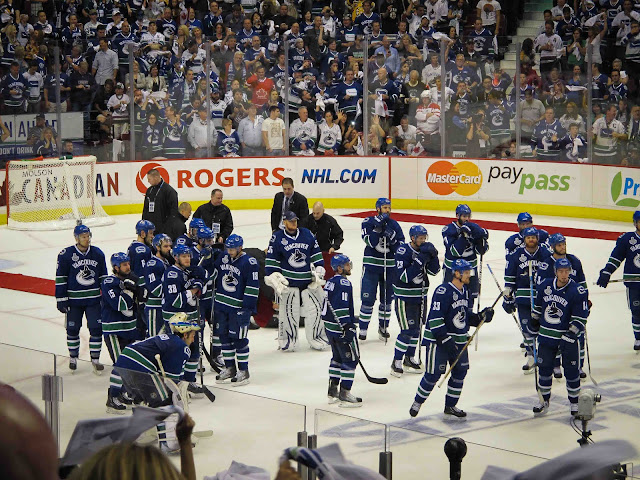 And honestly?  I was sad that the Bruins didn't win it on their home ice.  The Canucks fans were gracious, and clapped, but it just wasn't the same of course.
We stuck around to see the Stanley Cup.  And this was the only time in the entire game where the fans booed like I've never heard before.  Not because of the Bruins winning, but because of the NHL Commissioner ... not a popular guy. 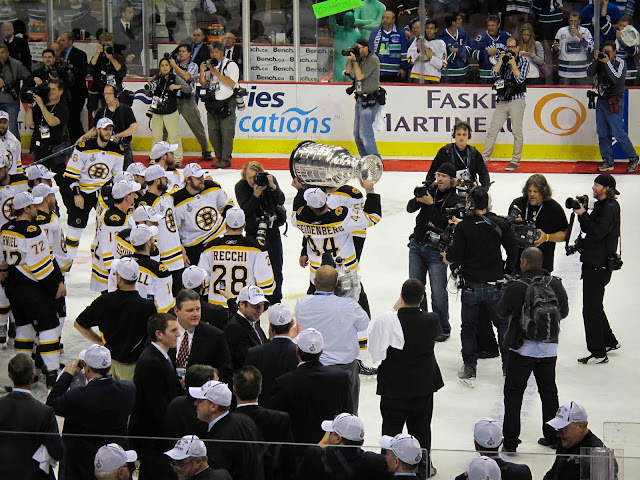 The crowd that stayed, really showed true fan-manship.  They clapped for each player - giving large cheers to Tim Thomas (who so deserved this ...), and local Canadian boys who got to win the cup in their country ... 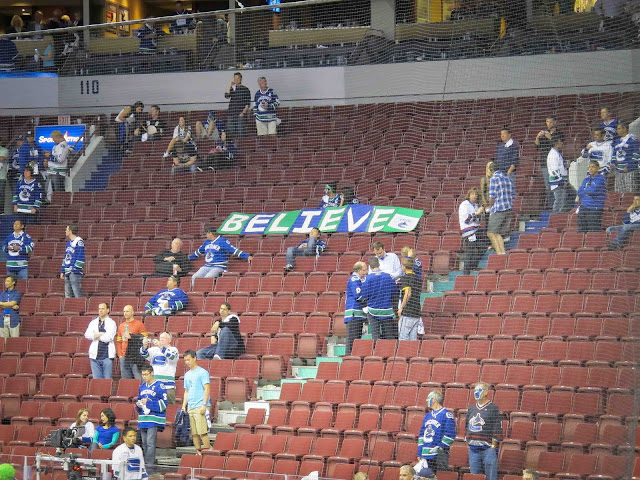 It was sad, yes, but nothing could prepare us for what was happening outside of the arena - that none of us knew about.
I did not take any photos.
My hubby and I walked out, and headed to our car about six blocks from the arena.  We could see the crowds, and the cops in their riot gear.  We could see billows of smoke coming up from what looked like to be in front of the post office.  We could see groups of thugs, stupid, idiotic thugs, looking for fights.  We witnessed the foulest of language by drunk 20ish men ... just plain angry.
These were NOT fans.
And when we got home and watched the news, I was just sickened.  How could these people do this??  How could we, as true Canucks fans, be thrown into a category with such inhumane people with no moral compass?
I came onto Facebook and read such sad, sad status'.  Even one friend of mine saying, "... this is why I HATE Canucks fans ... ".  And of course, I felt so defensive.  They are not me ... it was not Burrows' or Kesler's character out there ... it was people who came out for ONE reason.  To destroy.
To say that these people represent us, is to say that all Muslims are suicide bombers, or all anti-abortionists think killing those who perform abortions is right.  It's like saying all Caucasians are white supremacists and that women are all feminists.
It's just not fair - and I found it so difficult to turn my brain off and sleep last night.
I feel sad for our team, who only wanted to give us their best.  I pray that they do not feel any responsibility for what happened in our city.  I hope they can forgive, and that we can have a clean slate for next season.
I also hope that Vancouver can learn from this.  Inviting 100,000 people, some who had been drinking since noon, to watch the game on a street in downtown is just plain foolish.  Sure, if you could control who attended - it'd be great.  But I think that regardless of the outcome of the game, the same thing would've happened.  I have heard that Boston didn't even open their arena for fans, for fear of what a mass mob could do.
So.  If you're from Vancouver, I know you feel the sadness that I feel.  If you are not, please know that THIS Canucks fan is a TRUE Canucks fan.  I will cheer them on next year and the year after that.    This is my city, these are my Canucks, and I am so proud to be apart this incredible season.
Shame on you rioters who  tried to take that away.
Posted by Tawn at 10:38 AM

Very well said Tania. Those terrible people took what was already a very sad night and made it just so much worse. I'm glad you got to go - I would have so loved to even go to 1 game. Instead I cheered with my all from my couch - which to be honest - I was very glad to be at last night. Here's to next year!

Great post - It is so disappointing what happened downtown last night. I wish people just had more class and accepted it. And what's even more disappointing is most of those people probably weren't even fans of the game - just waiting for an opportunity to destroy, like you said. I'm glad you guys were ok - we were thinking about you after the game as we were watching the craziness. Then Lu texted J and said you had just gotten home :) And I never actually thought about the fact that maybe they shouldn't have let the crowds gather downtown - now that would have been smart!

Thanks for sharing - sure was an experience that you won't forget!

Good post Tania - I don't understand the mentality of some people - right they weren't fans especially when they came down with masks to hide their faces and with gas masks too.

On a lighter note your point and shoot takes fantastic pictures.

oops I'm signed in as Rich "RS" but it is Yvonne.

Very well said Tania...Just heard on the news this morning that the rioters had come prepared with all their amunition to create havoc and destroy. So whether the Canucks would have won or lost - they wanted to riot! They are NOT true Canuck fans that's for sure.

Very nice, Tania. I also know these feelings well, being from Detroit.
By the way, you are a phenomenal photographer, writer, songstress and more. Truly gifted.

thank you, everyone, for sharing your thoughts! I always appreciate it when you take the time to share them with me :-). Be blessed.